Use Simulink, Aerospace Blockset, and Simulink Coder to model and simulate the digital flight-control system and aircraft dynamics in real time

"On a tight schedule, we developed a pilot-in-the-loop simulation lab in which we can easily evaluate various control systems and rapidly adjust the feedforward path of the control laws if needed. Without MathWorks tools we would not have met our deadline." 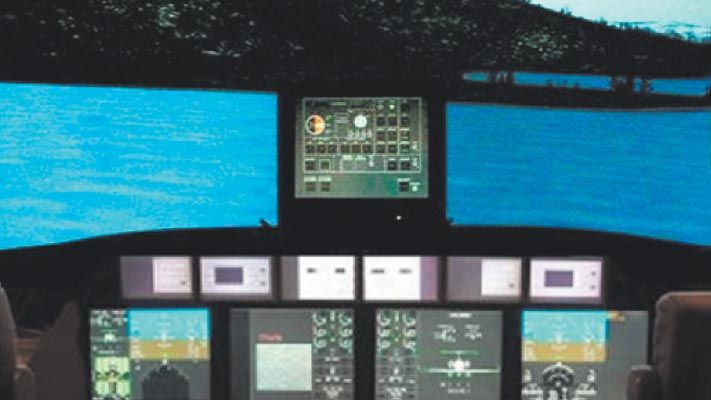 Gulfstream engineers needed to build a flexible pilot-in-the-loop aircraft simulation facility, including a six-degrees-of-freedom simulation of the aircraft, in preparation for a scheduled flight test of a modified Gulfstream G550.

To accelerate development and meet their tight deadline, the team planned to divide the project into multiple parts and work on all parts simultaneously. The flight control system development team required a highly interactive modeling and simulation environment to rapidly test and evaluate control laws. The team developing the aircraft dynamics simulation needed to further divide the model into smaller high-fidelity subsystems—including the flap control unit, flight dynamics modeling, air data sensors and systems, inertial reference units, and angle-of-attack sensors—which would be developed concurrently and then integrated into a complete aircraft simulation.

They developed the aircraft dynamics model by translating existing equations for the aircraft into Simulink. Originally developed in Fortran, these equations were based on a traditional flat-earth model. The team used Aerospace Blockset to upgrade this model with round-earth equations of motion that incorporate the shape of the earth, its rotation, and the variation of gravity.

For the equations of motion and the wind and turbulence model, the engineers adapted predefined blocks in Aerospace Blockset.

After validating the aircraft dynamics model against flight test data, the team used Simulink Coder to automatically generate C code, which they compiled to create a real-time simulation of the aircraft. A separate Gulfstream team developed the flight-control system model in Simulink. The two models, which communicated via shared memory, were then simulated together.

The simulation ran in interpreted mode, enabling Gulfstream engineers to analyze and debug the model as it ran by placing scopes on signals, introducing faults, and evaluating new algorithms.

Using a standard block from Aerospace Blockset, they connected the Simulink model to FlightGear flight simulation software to display window views based on aircraft state data.

The team used MATLAB® to postprocess simulation results and to create a user interface for changing flight conditions, selecting an airport, and inducing failure modes during simulation.

Gulfstream continues to employ the simulation lab for a variety of aircraft. "Because of the flexibility of Simulink, we can use the lab for a wide range of purposes," says Saeed. "It is highly modular and reconfigurable, so we can easily shift between different aircraft models, or evaluate different components."