A Brief History of MATLAB

The first MATLAB® was not a programming language; it was a simple interactive matrix calculator. There were no programs, no toolboxes, no graphics. And no ODEs or FFTs.

In this Cleve’s Corner, I’ll describe some milestones in the evolution of MATLAB from those simple beginnings.

The mathematical basis for the first version of MATLAB was a series of research papers by J. H. Wilkinson and 18 of his colleagues, published between 1965 and 1970 and later collected in Handbook for Automatic Computation, Volume II, Linear Algebra, edited by Wilkinson and C. Reinsch. These papers present algorithms, implemented in Algol 60, for solving matrix linear equation and eigenvalue problems.

In 1970, a group of researchers at Argonne National Laboratory proposed to the U.S. National Science Foundation (NSF) to “explore the methodology, costs, and resources required to produce, test, and disseminate high-quality mathematical software and to test, certify, disseminate, and support packages of mathematical software in certain problem areas.” The group developed EISPACK (Matrix Eigensystem Package) by translating the Algol procedures for eigenvalue problems in the handbook into Fortran and working extensively on testing and portability. The first version of EISPACK was released in 1971 and the second in 1976.

In 1975, four of us—Jack Dongarra, Pete Stewart, Jim Bunch, and myself—proposed to the NSF another research project that would investigate methods for the development of mathematical software. A byproduct would be the software itself, dubbed LINPACK, for Linear Equation Package. This project was also centered at Argonne.

LINPACK originated in Fortran; it did not involve translation from Algol. The package contained 44 subroutines in each of four numeric precisions.

In a sense, the LINPACK and EISPACK projects were failures. We had proposed research projects to the NSF to “explore the methodology, costs, and resources required to produce, test, and disseminate high-quality mathematical software.” We never wrote a report or paper addressing those objectives. We only produced software.

In the 1970s and early 1980s, I was teaching Linear Algebra and Numerical Analysis at the University of New Mexico and wanted my students to have easy access to LINPACK and EISPACK without writing Fortran programs. By “easy access,” I meant not going through the remote batch processing and the repeated edit-compile-link-load-execute process that was ordinarily required on the campus central mainframe computer.

So, I studied Niklaus Wirth’s book Algorithms + Data Structures = Programs and learned how to parse programming languages. I wrote the first MATLAB—an acronym for Matrix Laboratory—in Fortran, with matrix as the only data type. The project was a kind of hobby, a new aspect of programming for me to learn and something for my students to use. There was never any formal outside support, and certainly no business plan.

This first MATLAB was just an interactive matrix calculator. This snapshot of the start-up screen shows all the reserved words and functions. There are only 71. To add another function, you had to get the source code from me, write a Fortran subroutine, add your function name to the parse table, and recompile MATLAB. 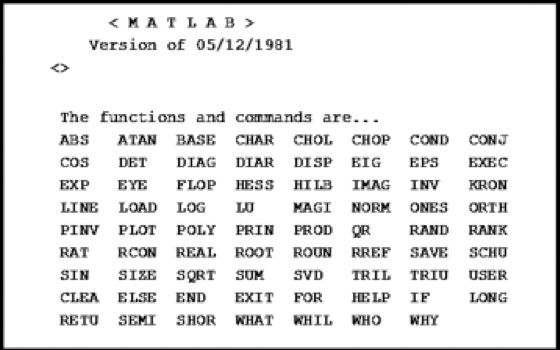 I spent the 1979–80 academic year at Stanford, where I taught the graduate course in Numerical Analysis and introduced the class to this matrix calculator. Some of the students were studying subjects like control theory and signal processing, which I knew nothing about. Matrices were central to the mathematics in these subjects, though, and MATLAB was immediately useful to the students. 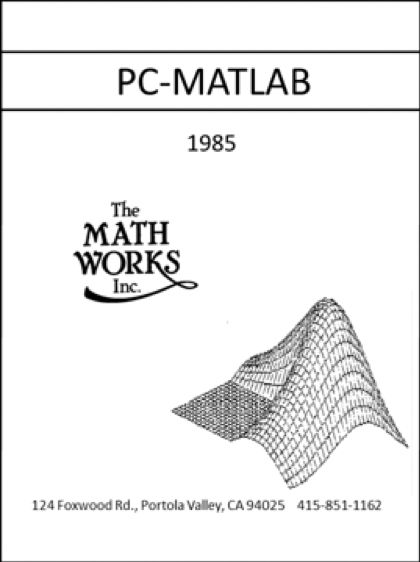 Jack Little had been in the graduate engineering program at Stanford. A friend of his who took my course showed him MATLAB, and he adopted it for his own work.

In 1983, Little suggested the creation of a commercial product based on MATLAB. The IBM® PC had been introduced only two years earlier. It was barely powerful enough to run a program like MATLAB, but Little anticipated its evolution. He left his job, bought a Compaq® PC clone at Sears, moved into the hills behind Stanford, and with my encouragement, wrote a new and extended version of MATLAB in C. A friend, Steve Bangert, worked on the new MATLAB in his spare time.

PC-MATLAB made its debut in December 1984 at the IEEE Conference on Decision and Control in Las Vegas. Pro-MATLAB, for Unix workstations, followed a year later.

Little and Bangert made many important modifications and improvements to Historic MATLAB when they created the new and extended version. The most significant were functions, toolboxes, and graphics.

While preserving its roots in matrix mathematics, MATLAB has continued to evolve to meet the changing needs of engineers and scientists. The key developments are shown in the timeline. Here, I’ll elaborate on some of them.

The numerical solution of ordinary differential equations has been a vital part of MATLAB since its commercial beginning. ODEs are also the core of Simulink®, the MATLAB companion product for simulation and Model-Based Design.

The Van der Pol oscillator is a classical ODE example.

The parameter μ is the strength of the nonlinear damping term. When μ = 0, we have the basic harmonic oscillator.

The MATLAB code expresses the oscillator as a pair of first-order equations. 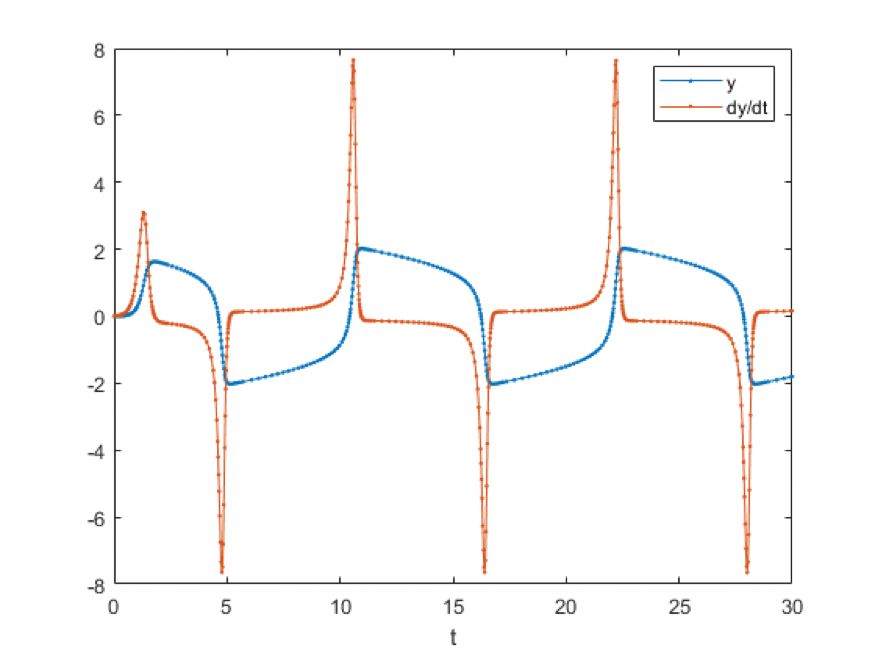 The Van der Pol oscillator, with the parameter μ set to 5, is a mildly stiff differential equation. In anticipation, I used the ode23s solver; the ‘s’ in the name indicates that it is for stiff equations. In the plot you can see some clustering of steps where the solution is varying rapidly. A nonstiff solver would have taken many more steps. A stiff ode solver uses an implicit method requiring the solution of a set of simultaneous linear equations at each step. The iconic MATLAB backslash operator is quietly at work here.

For many years, MATLAB had only one numeric data type: IEEE standard 754 double-precision floating point, stored in the 64-bit format. As people began to use MATLAB for more applications and larger data sets, we provided more ways to represent data.

Support for single-precision arithmetic began in the early 2000s and was complete by MATLAB 7 in 2004. Requiring only 32 bits of storage, single precision cuts memory requirements for large arrays in half. MATLAB does not have declarations, so single-precision variables are obtained by executable conversion functions.

Sparse matrices were introduced with MATLAB 4 in 1992. They are a memory-efficient way to represent very large arrays that have few non­zero values. Only the nonzero elements are stored, along with row indices and pointers to the starts of columns. The only change to the outward appearance of MATLAB is a pair of functions, sparse and full. Nearly all the operations apply equally to full and sparse matrices. The sparse storage scheme represents a matrix in space proportional to the number of nonzero entries, and most of the operations compute sparse results in time proportional to the number of arithmetic operations on nonzeros.

Cell arrays were introduced with MATLAB 5 in 1996. A cell array is an indexed, possibly heterogeneous collection of MATLAB objects, including other cell arrays. Cell arrays are created by curly braces, {}.

Cell arrays can be indexed by both curly braces and smooth parentheses. With braces, c{k} is the contents of the k-th cell. With parentheses, c(k) is another cell array containing the specified cells. Think of a collection of mailboxes. box(k) is the k-th mailbox. box{k} is the mail in the k-th box.

To call the roll, we need the list of names.

Major enhancements to MATLAB object-oriented programming capabilities were made in 2008. Creating classes can simplify programming tasks that involve specialized data structures or large numbers of functions that interact with particular kinds of data. MATLAB classes support function and operator overloading, controlled access to properties and methods, reference and value semantics, and events and listeners.

The MATLAB graphics system is one large, complex example of the object-oriented approach to MATLAB programming.

The first versions of MATLAB were simple terminal applications. Over time we added separate windows for graphics, editing, and other tools. These gradually made MATLAB easier to use, especially for users without prior programming experience. Two specific features that have had the biggest impact are the desktop and the Live Editor.

The MATLAB desktop was introduced in 2000. Here is a screenshot showing how it looks today. 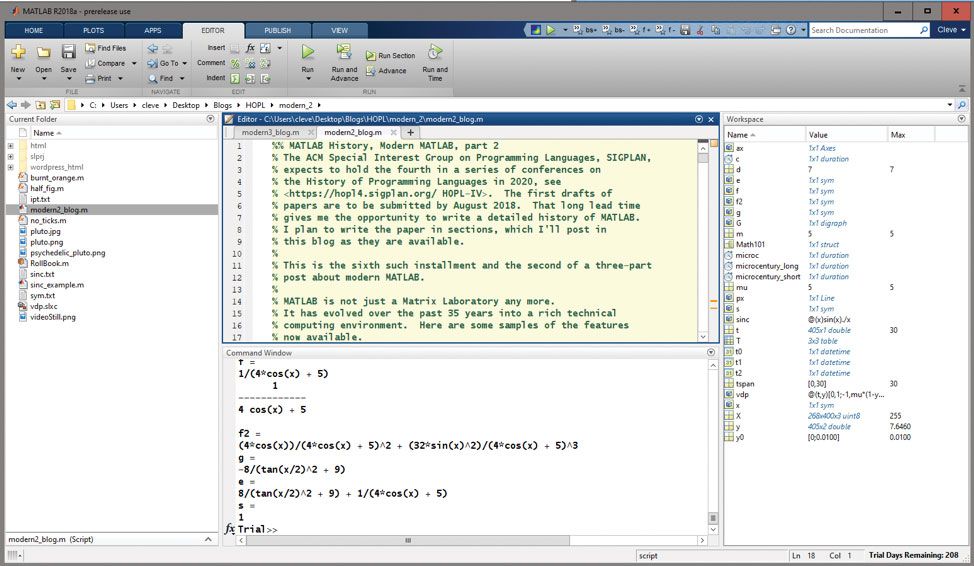 Four panels are visible: the current folder viewer (left), the workspace viewer (right), the editor/debugger (top center), and the traditional command window (bottom center). A file viewer and a command history window can also be included in personalized layouts.

Any panel can be closed or undocked into a standalone window.

The Live Editor was introduced in 2016 and is still evolving rapidly.

Descriptive text and MATLAB input, output, and graphics are combined in a single interactive document that can be exported to HTML, PDF, or LaTeX. 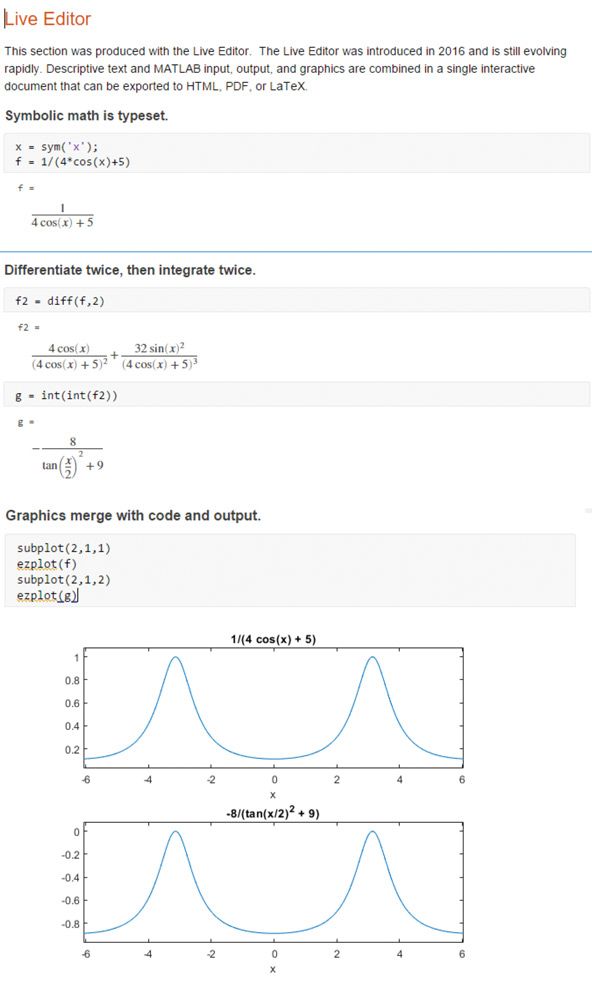 Parallel Computing Toolbox™ was introduced at the SuperComputing conference in 2004. The following year, at SC05, Bill Gates gave the keynote talk, using MATLAB to demonstrate Microsoft’s entry into high-performance computing.

The toolbox supports coarse-grained, distributed memory parallelism by running many MATLAB workers on several machines in a cluster or on many cores in a single machine. MPI is used for the underlying message passing. By far the most popular feature of the toolbox is the parallel for loop command, parfor.

Much of the power of modern MATLAB derives from the toolboxes available for specialized applications. As of release 2018a, there are 63 of them:

MATLAB has come a long way since the simple calculator that started it all. It is a living ecosystem supporting all aspects of technical computing. We will continue to strengthen existing features as we carefully add new ones. Our goals are always ease of use, power, and speed.