This question is closed. Reopen it to edit or answer.

Passing a line through 2 determined points of a dataset automatically

Alfonso on 30 May 2018
⋮
Closed: Alfonso on 13 Jun 2018
Accepted Answer: John D'Errico
I am trying to draw a line which cuts through approximately the middle of a cloud of points. The data sets have similar shape with some variances, so for each of the cloud of points I am trying to automatically find (use of loop for example) the 2 correct points that when defining a line, this will cut it as it is shown in the images (I have used imline to create the desired line just as an example to show what I mean):
If you look carefully you will see that the correct points that define the line are approximately in the same zone (observing the plots) for the 2 datasets. The idea would be that the line would cross through this characteristical zones which are present in all the datasets.
2 examples: 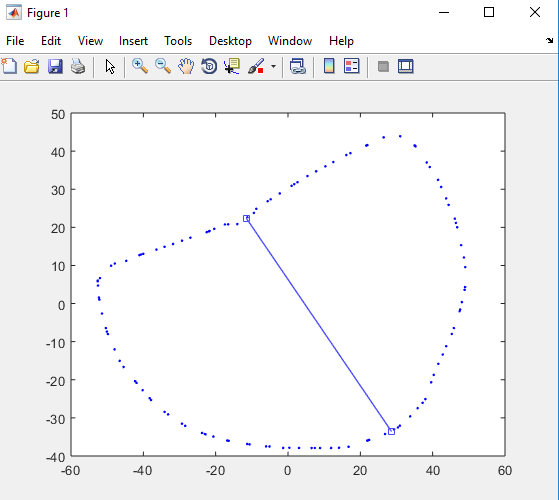 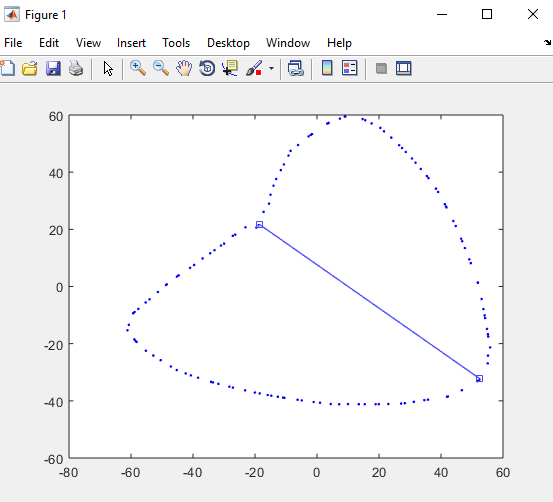 The problem is I am having some difficulties to find an effective way of obtaining this. I thought of maybe using centroid and calculating euclidean distances from centroid to points, etc. But it is nearly impossible that the centroid will coincide with the desired line.
I have uploaded the 2 datasets as data1.mat and data2.mat.
Thank you for any help in advance.

John D'Errico on 30 May 2018
⋮
Edited: John D'Errico on 30 May 2018
Your problem is one of definition. Until you do that, i.e., define what you mean by "middle", you can do nothing.
In fact, there are infinitely many lines that will pass through the mean of your data. Surely that is a good definition of "middle". We could equally easily define the "middle" as a line that has 50% of the points on either side of the line. Whoops, again, infinitely many such potential lines.
You seem to be drawing a line that is essentially a line of symmetry. But you never said anything at all about that. Sadly, that is only a line of approximate symmetry in both cases. The problem is the eye is good at seeing patterns like that. Computers? Not really. You need to tell them carefully and accurately what you mean, which essentially involves code.
So, are you looking for a line of symmetry? Must the line pass through two of the points? (It does not appear you have drawn them like that.) So, now you have an extra problem, in that you also need to learn to interpolate such a curve.
Next, is this set of points a completely scattered one, in that they are provided in random order? Or do you have them in sequence around the circumference of this cloud, essentially as a polygon? I loaded one of those files. They are scattered. So worse yet, while your eye easily sees this as a heart shaped curve, the computer just sees a cloud. Again, that makes it a more difficult problem. Is it a solvable problem? Probably.
Finally, are these point clouds as you have shown them similar to the REAL problem you are facing, or have you just drawn a couple of nice examples? Is 200 points or so a reasonable estimate of the real problems you will face? Or may you have 200000 points some times?
Addendum: Assuming your question is really as I think it is...
How might I solve the problem of finding a line of approximate symmetry?
I'd start by sorting the points in order, IF possible. Since your data seems to be simply deformable to a circle, polar coordinates is a good way to do that.
x = data1(:,1);
y = data1(:,2);
plot(x,y,'-o')
% So random order initially. 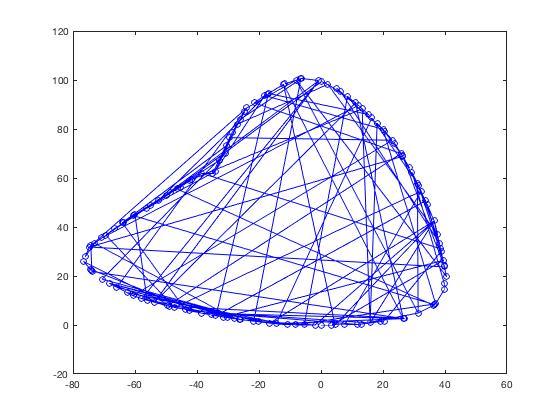 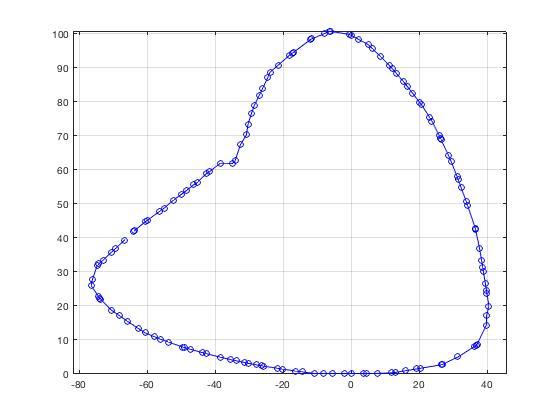 A traveling salesman solver would help in worse cases, finding the shortest path to traverse between the list of points. But we don't need anything like that for these simple cases.
How might I find a line of symmetry?
Simplest seems to write a function that would accept any two points around the curve, which would define a line. Then take all points on ONE side of the line. Create a curve from them. Next, all points on the other side of the line would get mirrored across the line. Find the closest point on the curve to those mirror images, summing up all of the distances.
Finally, I would use an optimizer to find the BEST two such points, such that the total mirrored sum of distances is minimum.
I'm not going to write that code, or even give you any more depth in it than this without validation of my wild guesses.

⋮
Thanks for answering John.
These datasets belong to a same plane cut of different 3D models. The 2 I have uploaded are real examples of the ones I use, so the nº of points I work with are around 180 - 210 points. Sorry for uploading the datasets with disordered points, I indeed sort them out later in my code.
Attaining to the line that has to be drawn, you guessed right, as I was refering to the line of "symmetry", or approximate symmetry in my case. The objective of drawing this line in each plane cut is to get an effective reference of the orientation of the plane cut in order to apply if needed an angle correction of the dataset to reorientate a plane cut of a 3D model to the same plane cut of a different 3D model.
About your idea of the function, it seems quite good although I haven't fully understood the part "Then take all points on ONE side of the line. Create a curve from them. Next, all points on the other side of the line would get mirrored across the line"; the idea is to only draw 1 line? the user shouldn't be able to input the 2 points he wants to use to define the line (I am not quite sure if you meant this), first the function should find the 2 points and then define the line although I am not quite sure how to approach this.
I would appreciate if you could explain me a little bit more in depth your idea.
Thanks in advance.

⋮
I wrote some code. I'm not terribly happy with the stability of the result, based on starting values. That is mainly because your curves are not that dissimilar to a circular arc, and because optimizations can get stuck in locally optimal solutions, even when not globally optimal.
If I apply what I wrote to your first set of data, I can get this: 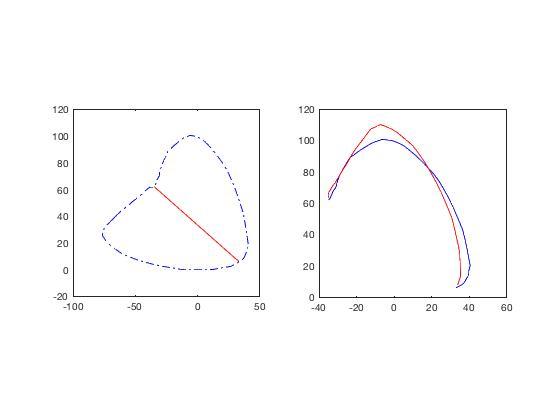 So the right figure shows the two halves of the curve mirrored on top of each other, across the line of proposed symmetry.
But, as it turns out, that solution is not much better than this alternative stable point for an optimization: 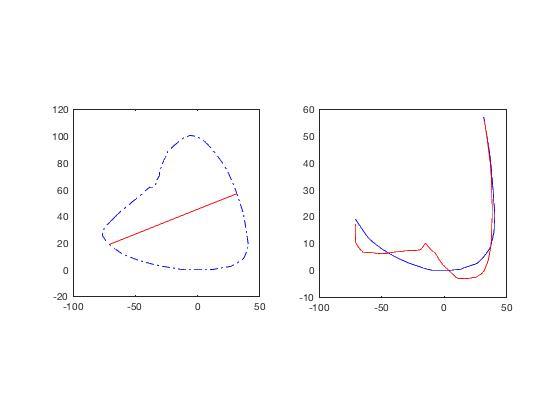 Similarly, on your second curve, I can get this: 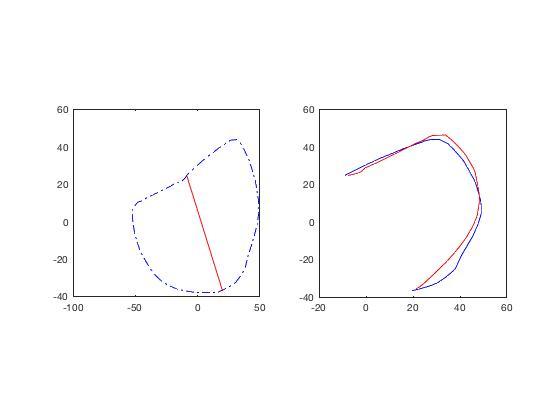 Note that I'm not totally confidant that is where you would draw the line of symmetry, were you to draw it by eye. But numerically, that is what was found.
You might prefer the line drawn on this next figure, at least what I see on the left seems better, but when you look at the two halves mirrored on top of each other, the previous result is far better. 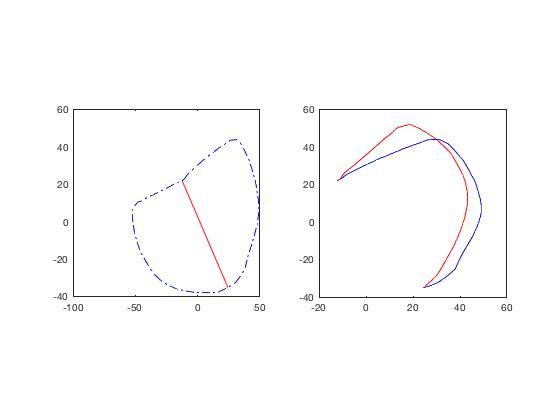 However, I can also find this as a local minimizer: 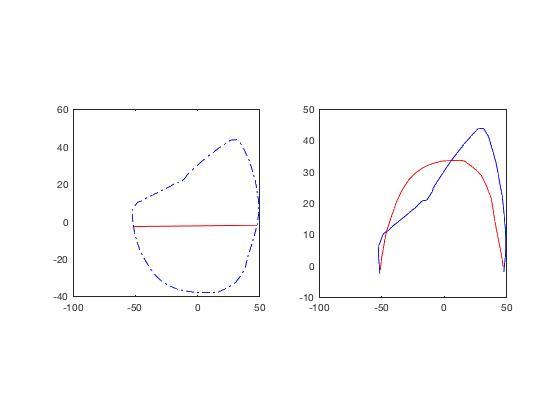 The point is, you would need to use such a code only if you were to verify the results by eye.
As I said before, finding a line of symmetry is something the eye can do well, but writing code for it is not so trivial.
Feel free to contact me directly on this, and I can send you the code. I won't post it, because it will take some explanation.

⋮
Hello John,
Seeing those results, the first result of each dataset is exactly what I meant.
How can I contact you so you can give me the pertinent explanations?
Thank you in advance

⋮
If you click on my name, there is a blue contact me link, on the left side of the page. But, admittedly, my e-mail address is not well hidden online. woodchips@rochester.rr.com

⋮
Okay, I sent you a message through the blue contact link of your profile a few mins ago before reading your last comment.

⋮
Hmm. I've not gotten anything yet in my mail. Now I realize why. I bastardized the address in that link, because I was getting too much junk mail from kids wanting me to do their homework. Sigh. I changed it back. Send another mail.
Direct mail is fine. I'll check again this afternoon.

⋮
Okay, I sent it again.