Now we can find the roots of the derivative function. The local maxima of the absolute value will lie at those roots.
groots = solve(dgdx,x,'maxdegree',3)
groots = 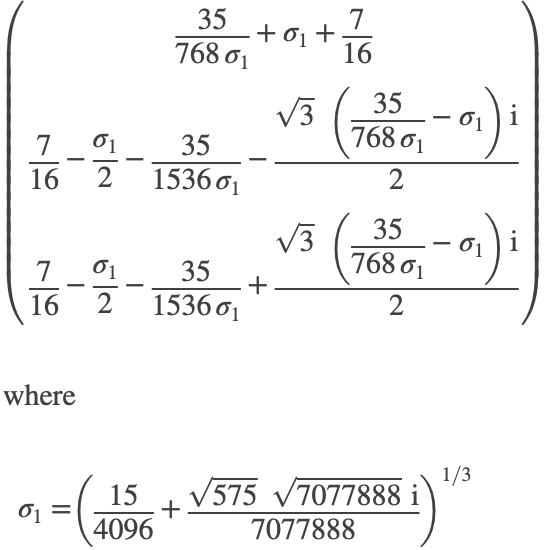 They are not very useful in that form, so convert them to floating point values
groots = vpa(groots)
groots =

You can see tiny imaginary parts, but they are irrelevant. They are just floaitng point trash. Discard the imaginary parts.
groots = real(groots)
groots =

Now, evaluate the function at those points, take the absolute value, and find the largest of the local maxima.
localmaxima = abs(subs(gx,x,groots))
localmaxima = 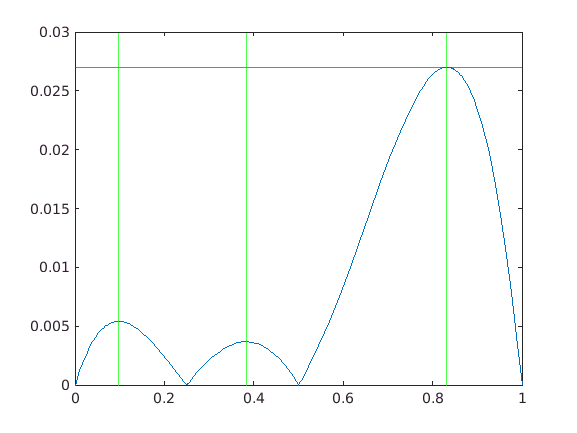 I never moved away from symbolic computations until the very end, when I wanted to plot it all.
Could you have solved this using tools like fminbnd? YES. But then you would work entirely in terms of numberical, double precision functions.

⋮
Thanks for your effort.I am also grateful to you.
When I run your code ,this shows me the error below:
Error using solve>processString (line 354)
' 3 ' is not a valid expression or equation.
Error in solve>getEqns (line 284)
eqns = processString(eqns, v, vc);
Error in solve (line 160)
[eqns,vars,options] = getEqns(varargin{:});
Error in Maxima_Abs_3 (line 4)
groots = solve(dgdx,x,'maxdegree',3)
It also shows the error:
Undefined function 'max' for input arguments of type 'sym'
Error in Maxima_Abs_3 (line 8)
gmax = max(localmaxima)
That means 'max' function shows undefined for symbolic input argument.
It also shows the error:
Undefined function 'yline' for input arguments of type 'double'.
yline(double(gmax),'r');
How can I resolve the above error?
The other parts of your code are running smoothly.

⋮
The code I wrote was entirely valid. However, you are using an old release of MATLAB. What release, I have no clue.
Whay can I say this? Because yline was introduced in R2018b. So your release is older than that. The other errors you mention are also consistent with having an old release.
You can probably just use
groots = vpasolve(dgdx,x)
instead of the line I gave.
And the call to yline is only to show a horizontal line in the plot.
Or, you can do as I also suggested, and completely avoid use of symbolic tools. That is your choice.