In this repository we provide the code and annotation GUI for DeepAction, a MATLAB toolbox for automatic annotation of animal behavior in video described in the preprint. Our method extracts features from video and uses them to train a birectional LSTM classifier, which in addition to predicting behavior generates a confidence score for the predicted label. These confidence scores allow for the selective review and correction of ambiguous annotations while omitting unnecessary review.

Included in this repository is:

Adding the toolbox to your MATLAB search path

All this is required to begin using DeepAction is to add the toolbox folder to your MATLAB search path. The command to do this is below:

where toolbox_folder is the path to the toolbox repository. The command savepath saves the current search path so the toolbox doesn't need to be added to the path each time a new MATLAB instance is opened. Don't include it if this is not desirable.

To demonstrate the toolbox, we run the workflow below using the home-cage dataset from Juang et al (see references). These demonstration projects are designed to familiarize users with the toolbox, while minimizing the time- and computationally-intensive components of the workflow (i.e., generating temporal frames and spatiotemporal features). Scripts can be found in the examples folder.

To do demonstrate different facets of the toolbox, we split the demonstration into two sets. In the first, we show how to create a project, extract features, and launch the annotator. The data for this project are a series of short clips (5 minutes each), selected to decrease the time required to generate frames and features. In the second project, we guide users through training and evaluating the classifier and confidence-based review, as well as launching the confidence-review annotator. For this project we provide pre-extracted features, we well as the corresponding annotations, for all the videos in the home-cage dataset. 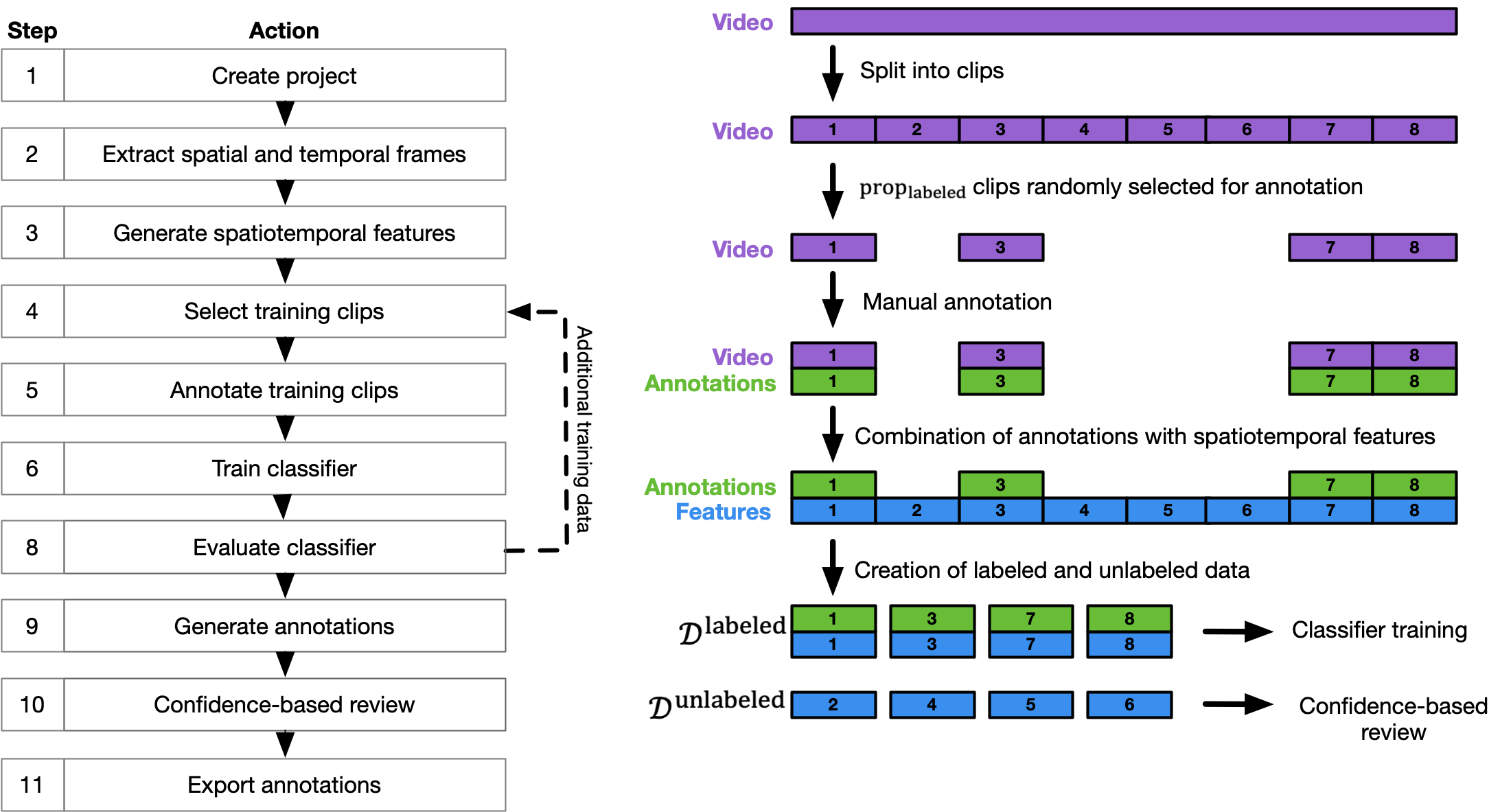 The example data can be found via Google Drive link here. The contents of the example folder are as follows:

In this project we provide a small number of short video clips from the home-cage dataset, and demonstrate steps 1-5 on the workflow below. The file to run this is demo_project_1.mlx in the examples folder of this repository. In this script, users:

In the second set, we provide annotations as well as the spatial and temporal features needed to train the classifier, and guide users through the processes of training and evaluating the classifier and running the confidence-based review. The file to run this project is demo_project_2.mlx in the examples folder. Here, users:

In addition, we also provide a demonstration of how to import annotations from a .csv file into a new DeepAction project. The code to run this demonstration can be found in the FormatAnnotations.mlx file in the examples folder.

In the documentation folder, we provide markdown files containing descriptions for the configuration files, GUI, and DeepAction functions. 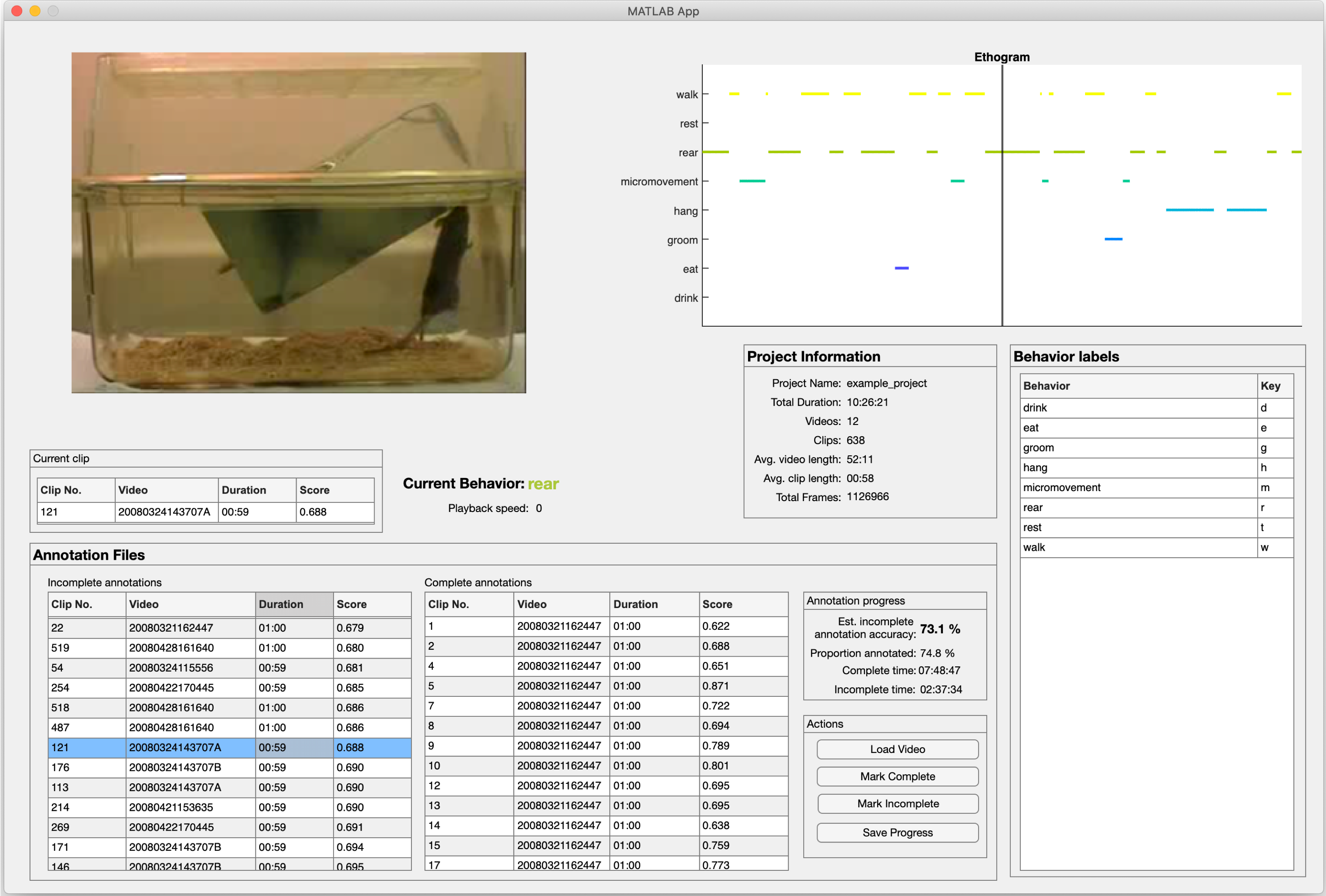 ./project_folder/frames spatial and temporal feames corresponding to the video data in videos

./project_folder/rica_model dimensionality reduction models (only one model needs to be created for each stream/camera/dimensionality combination)

As this is the initial release, we are expecting users might run into issues with the program. With this in mind, annotations are backed up each time the annotator is opened (so, if there's some sort of data loss/mistake/bug when using the annotator, or other components of the workflow that access annotation files, prior annotations can be restored from file). Please raise any issues on the issues page of the GitHub repository, and/or contact the author in the case of major problems. In the near future, the "to-do" items are:

All code, except that used in references, by Carl Harris (email: carlwharris1 at gmail; website; GitHub)

Created with R2022a
Compatible with any release