Use MathWorks tools to develop a prototype of the motion test system controller, generate code, and simulate the controller with the real mechanical system

"Without MathWorks tools, we would have had to use C or Fortran to construct a suitable simulation model. We would not have been able to analyze the behavior of the controller and the mechanical system together before prototyping." 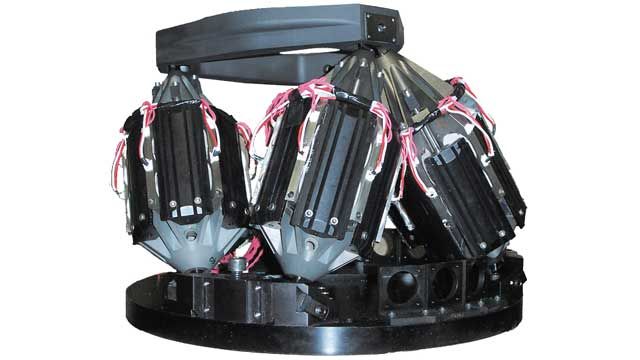 Intercept missiles are susceptible to very high frequency dynamic motion, such as vibration. This susceptibility can result in sensor line-of-sight errors on missile closed-loop guidance. To address this problem, engineers use flight motion simulators to replicate the disturbances. However, the most advanced test systems have bandwidths of only 60 to 100 Hz, contributing to unreliable test results.

CARCO Electronics used MathWorks products to design and manufacture a six-degrees-of-freedom motion test system that could operate at frequencies of 1000 Hz. MathWorks products saved CARCO time and money by enabling them to simulate the behavior of the controller and the mechanical system together and then optimize the control system before building a costly prototype.

"Without MathWorks tools, we wouldn't have touched this problem," says Robert Peterson, vice president of engineering at CARCO. "We would have had to use C or Fortran to construct a simulation model. We wouldn't have been able to analyze the behavior of the controller and the mechanical system together before prototyping. It would have been a nightmare!"

CARCO needed to develop a motion test system that could accurately represent low-amplitude, high-frequency dynamics up to 1000 Hz. Whether they could create a mechanical instrument that exhibited the required properties was questionable. Designing a traditional Stewart platform (hexapod) that could operate at frequencies of 1000 Hz presented challenges. For instance, the mechanical structure had to be stiff yet remain light in weight, while the actuators and the control system had to respond to motion instantly.

By themselves, these basic criteria could be met. However, in an integrated system, they presented a formidable engineering problem.

CARCO used MathWorks tools to develop a high-frequency motion simulator that consists of three anchor blocks, a plate on which the payload is mounted, six lower and three upper joints, and six electromagnetic linear actuators.

For the mechanical system, CARCO designed a new set of specialized mechanical actuators and modeled these actuators in Simulink.

For the controller, they developed a multiaxis, dynamically decoupled control system to minimize the impact of the multiple eigenvalues in the coupled kinematics of the Stewart platform. They implemented the control algorithms using Simulink and MATLAB and defined the control system architecture with Simulink blocks. Each system subblock defined a C-callable function and its corresponding input and output variables.

Next, they used Simulink Coder to generate ANSI® C code from their Simulink block diagram representation of the control law.

The controller is undergoing integration and final test.