Evaluate energy-storage technologies for a hybrid hydrostatic drivetrain, and identify the most cost-effective alternative

“Model-Based Design supports a systematic approach to the design of drivetrains and other complex mechatronics systems. Detailed analysis of design alternatives based on the simulation of dynamic physical models and optimal controllers enabled us to make informed decisions early in the design phase.” 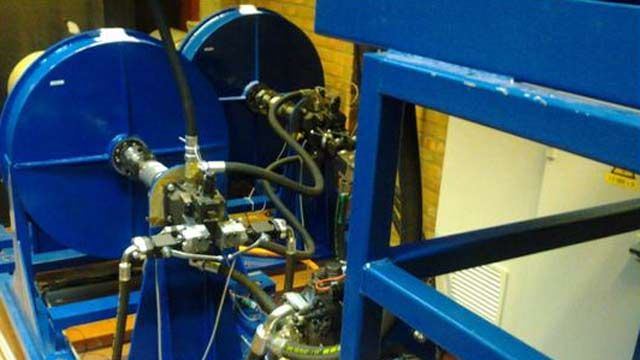 In one such project, FMTC engineers used MATLAB®, Simulink®, and Simscape™ to design and optimize a hybrid hydrostatic drivetrain.

“Simscape made it easy to integrate super­capacitors and hydraulic accumulators into our hydrostatic drivetrain model to test the impact of storing braking energy,” says Gregory Pinte, program manager at FMTC. “Simulations enabled us to evaluate the energy efficiency of hybrid designs, optimize our controllers, and gain valuable insights that we shared with our member companies.”

FMTC needed to compare the performance of different energy-storage elements in a hybrid hydrostatic drivetrain to determine which would result in the lowest total cost of ownership (TCO), factoring in installation and ongoing fuel costs. FMTC engineers had a standard hydrostatic drivetrain in their lab, but integrating energy-storage elements directly into this setup for testing would require months of effort. The FMTC team wanted to accelerate design and optimization via modeling and simulation.

To conduct a fair comparison of the energy-storage elements, FMTC had to develop control systems to govern the optimal flow of power through the drivetrain with the new architecture and then identify the best design for each element under consideration based on the simulation of some load scenarios.

Using Simulink and Simscape, they developed models for each component in a typical hydrostatic drivetrain, including the driving motor, hydraulic pump, hydraulic motors, and a torque load.

For each component, the team conducted experiments in the lab, measuring torque, speed, and pressure. Using a toolbox they developed based on MATLAB and Optimization Toolbox™, they estimated model parameters based on these measurements. They then developed lookup tables that mapped pressure, speed, and stroke volume to energy efficiency.

The team also estimated internal inertia, time delays, and other parameters to more accurately model the dynamic behavior of the components with Simulink and Simscape.

The engineers then built a system model from the component models, linking them with valves, hydraulic resistances, and other hydraulic circuit elements from Simscape Fluids™.

They verified and refined the system model by running simulations in Simulink and comparing the results with measurements of the complete driveline.

Once they had an accurate model of the driveline, the team developed Simscape models of two energy-storage components: a supercapacitor with a DC-DC converter and a hydraulic accumulator with its associated valves and lines.

They integrated each of these components into the system model separately, and used in-house methodologies to develop and implement optimal control algorithms in MATLAB for the two hybrid drivetrains. These control algorithms calculate the settings for drivetrain components, such as the swash plate angles for the hydraulic pump and motors.

The team then performed closed-loop simulations in Simulink across a range of capacitor types and accumulator sizes, estimating TCO for each configuration.

FMTC plans to use Simulink Coder™ to generate code from its plant models to support real-time hardware-in-the-loop testing.