“Without a real-time platform, we would need costly flight tests to demonstrate our technology to our customer. With Model-Based Design we sped the development of a six-degrees-of-freedom model for real-time, hardware-in-the-loop simulations that increased our customer’s confidence in our technology.” 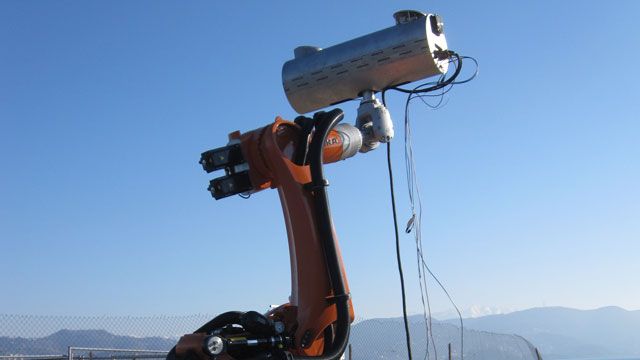 Testing setup with three-degrees-of-freedom robot and missile mockup with antennas.

Engineers at MBDA recently created a tracking antenna controller that enables a rocket in flight to communicate to the ground station via satellite. After MBDA successfully demonstrated this technology to its customer in static tests, the customer asked MBDA to demonstrate its operation in a dynamic environment.

To meet this requirement as rapidly as possible, MBDA used Model-Based Design to develop a real-time, six-degrees-of-freedom motion platform. During demonstrations, the tracking antenna controller counteracted the motion of the platform to keep the antenna pointed at the satellite, ensuring reliable communications.

“Our objective was to gain the confidence of our customer by providing a dynamic demonstration of satellite communications in a very short time,” says Tonino Genito, department head at MBDA. “Model-Based Design with MATLAB and Simulink enabled us to rapidly develop a first prototype and speed up the entire process while reducing costs.”

In the static demonstration, a rocket platform located in La Spezia communicated via satellite to a ground station 400 km away in Rome. To achieve a milestone for continuing development, MBDA needed to conduct a real-time demonstration in which the attitude of the rocket changed as it would in flight.

On similar projects in the past, MBDA developed numerical simulation systems by hand-coding in C++ or Fortran. The engineers recognized that this approach would be too slow to meet the project’s deadline.

With less than three months to adapt the six-degrees-of-freedom motion platform, the team of just two engineers needed to speed the development of the motion platform and its real-time, hardware-in-the-loop (HIL) simulation system.

The MBDA engineers used Model-Based Design with MATLAB® and Simulink® to develop the real-time motion platform.

They adapted a six-degrees-of-freedom rocket model that MBDA had previously developed in Simulink. They combined this model with the tracking antenna controller model, which another MBDA team had developed in Simulink. Using the combined model they ran Monte Carlo simulations and refined the system’s accuracy and bandwidth requirements.

The two engineers generated code from the  antenna controller model with Simulink Coder™ and used Simulink Real-Time™ to run the code in real time on a dedicated target PC connected to a motion platform actuated by an industrial robot. The antenna was mounted on the platform, and the robot’s motion was based on the results generated by the real-time simulation.

Using this setup, the team conducted real-time HIL tests with the platform and tracking antenna to verify their requirements and the results of earlier simulations.

After conducting further internal tests, MBDA demonstrated that the antenna controller could track a satellite throughout an entire mission simulated on the motion platform while maintaining reliable satellite communications between the test platform and the ground station.

MBDA engineers are currently working on a project that will enable them to test guidance, navigation, and control algorithms on embedded hardware by generating code from Simulink models with Embedded Coder®.