Convert an ODE to algebraic equations

Sergio Manzetti on 21 Feb 2018
⋮
Answered: Sergio Manzetti on 22 Feb 2018
Accepted Answer: John D'Errico
Hello, how can I convert a nonlinear ODE of third degree to a set of algebraic equations, which I can at last solve with fsolve? Some mentioned the Haar wavelet, however I cannot find an example of this on MATLAB.
Thanks

John D'Errico on 22 Feb 2018
⋮
Edited: John D'Errico on 22 Feb 2018
It has been a while since I used these methods, so I will not go that deeply into the answer. But there are multiple ways to solve a differential equation, not just the ones you find in ODE45 or dsolve. Well, to try to solve one at least. And if the ODE is nonlinear, I would not expect any real hope that you will get an analytical solution.
Here is your ODE:
y' ' '+(1-x^2)y = 0
Well, not too messy at least. there are some common ways you might decide to solve this that do not fall into the standard methods described above, that will convert the problem into a set of (nonlinear) algebraic equations.
Simplest is to discretize the problem, using finite differences. Thus over some domain, we will approximate y at a set of points. Suppose you intend to solve the ODE on the domain [0,a]. Choose some number of points (n) to break the domain into, such that y is now some vector of values at the locations
x = linspace(0,a,n-1);
At each location, we will formulate one nonlinear equation, using a finite difference operator on that third derivative. (Be careful near the ends of the domain, since you may need to tweak that finite difference to be valid.) Create several additional equations to represent the initial/boundary conditions on the ODE. In the end, you want n nonlinear equations in the unknown vector y.
The solution is simple if the ODE is linear, because the result will be a linear system of algebraic equations. But it is only an approximation, as good as the discretization you have chosen. It will NOT yield an analytical solution.
There are other approaches. For example, you might decide to represent y as a spline. Given the third derivative in your problem, I might decide to work with a quintic spline. You should be able to see where this is going, since a spline model will be nicely differentiable. Substitute into the ODE, and the result will again be a system of nonlinear equations in the coefficients of the spline. Again, this cannot possibly result in an analytical solution to your problem.
If I had to guess however, you are thinking about a Galerkin method. Here we will approximate y(x) using some intelligently chosen expansion. Some common choices might be to represent y(x) as a Fourier series, or a sum of Bessel functions, or perhaps a sum of orthogonal polynomials, thus Chebychev, etc. (Were you to go the last route, you might find the chebfun toolbox of great value. Read here, for example. ) So we will write y(x) as a sum of terms a_n*y_n(x), for a set of undetermined coefficients a_n. Form a dot product with each member of the orthogonal family, which results in one nonlinear equation per dot product. Again, solve for the undetermined coefficients in the series expansion. Will this yield an analytical solution? Of course not, unless you can find something nice happens. However good things never seem to happen on these things, at least not to me.
So, all of the above approaches can be made to result in a system of nonlinear algebraic equations to solve. NONE of them will generally yield an analytical solution on a nonlinear problem.
For example, were I to try to solve your ODE
y' ' ' + (1-x^2)*y = 0
on the domain [0,1], using chebfun. I'll be pretty arbitrary, with y(0)=1, and y'(0)=0, y''(0)=0.
L = chebop(0, 1);
L.op = @(x,u) diff(u,3) + (1-x^2)*u;
L.lbc = [1 0 0]; % short way of writing all three BC at x==0
u = L\0
u =
chebfun column (1 smooth piece)
interval length endpoint values
[ 0, 1] 13 1 0.85
vertical scale = 1
plot(u) 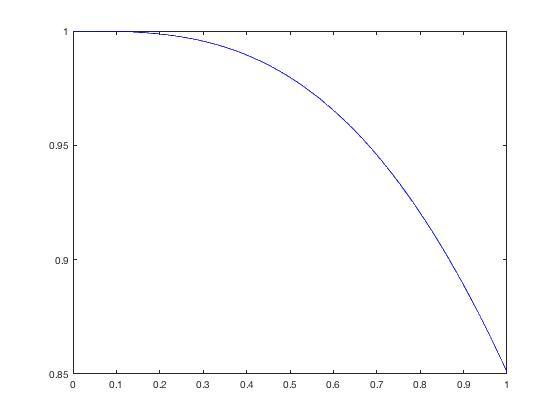 Steven Lord on 21 Feb 2018
⋮
If you have an ODE, why solve it (or a modified version of it) using fsolve? Why not simply use one of the ODE solvers included in MATLAB? The "Choose an ODE Solver" section linked on that page includes an example of how to solve a higher-order ODE.

⋮
Edited: Sergio Manzetti on 21 Feb 2018
Because solving the N-algebraic equations of it may apparently give an analytical solution.

⋮
Depending on how complicated your ODEs are, the tools to solve differential equations in Symbolic Math Toolbox may be able to give you an analytical solution.

Sergio Manzetti on 22 Feb 2018
⋮
Edited: Sergio Manzetti on 22 Feb 2018
Thanks John, it appears I must have misunderstood the claim of an analytical solution. It was suggested by one of the authors of this paper, using this method.
https://www.researchgate.net/profile/Naresh_Berwal/publication/268071487_Solution_of_partial_differential_equation_based_on_Haar_wavelet/links/5a389678aca272a6ec1e924c/Solution-of-partial-differential-equation-based-on-Haar-wavelet.pdf
I will try to use Chebtool! Thanks

⋮
There is no reason why you CANNOT gain an analytical solution. As I said, you might be able to use a family of orthogonal functions in a Galerkin style solution, getting a solution. Wavelets are just another way of decomposing a function into a sum of terms. If something nice drops out the end, using carefully developed mathematics, then great. You won the lottery. It can't hurt to try.
However, nothing that you do with fsolve will give you an analytical solution, as it is a purely numerical solver. Chebfun won't give you that either, but it is so flexible and nice to use, that it may help you in variety of ways.
If you really need an analytical result, I assume you have tried dsolve on your problem, and it laughed at you. Don't you hate it when computers do that? ;-) But dsolve is the best thing to try.
I did try tossing it into Wolfram Alpha. It does not show an analytical solution either. So I expect dsolve will fail if you try.
So go for chebfun. Even if it does not give you everything you need here, you will learn to use a tool that is (IMHO) insanely great. And how can that be a bad thing?

⋮
Edited: Sergio Manzetti on 22 Feb 2018
"If you really need an analytical result, I assume you have tried dsolve on your problem, and it laughed at you. Don't you hate it when computers do that? ;-)"
:D Yes, quite disappointing...!
Got cchebfun downloaded and installed, will check it out..
Is there any chance that paper I supplied can give MATLAB a headstart to provide a script that can do this analytically?

⋮
I read through the paper just now. It only offers approximate solutions, then compares them to exact solutions obtained using other methods. The analytical solutions they had were easy to gain, because the problems they were solving were basic Laplacian PDEs.
There was no claim that I saw for a method that would offer an analytical solution. Anyway, that methodology was only applied to linear problems in their examples.
So, sorry, but I think it will be of little real value to you here. And it will require you to do the computations yourself, writing a bit of code to implement.

Sergio Manzetti on 22 Feb 2018
⋮
Thanks John! Sounds like something I may do in the future.
Cheers