Homework Help: What did I do wrong?

William Dowden on 2 Mar 2021
⋮
Commented: Steven Lord on 2 Mar 2021
My code works as intended, except when I input "kmpl", it displays the error shown below. What can I do to resolve this? Also, are there any simplifications I can make to my code? I feel like it can be optimized. Thanks! 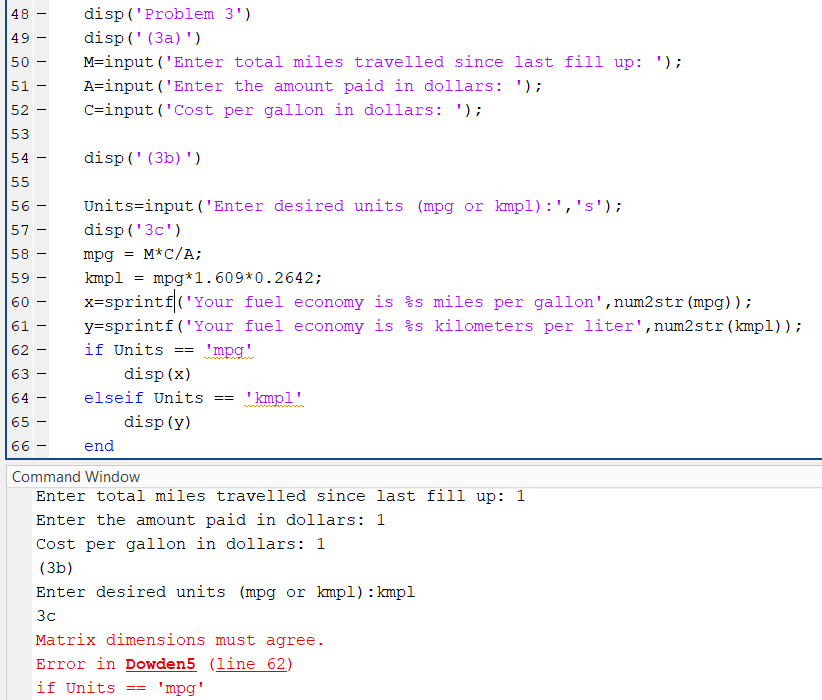 Jan on 2 Mar 2021
⋮
Edited: Jan on 2 Mar 2021
The == operator compares its arguments elementwise. If they have a different number of elements, this fails, except it one is a scalar.
Solution: Compare char vectors with strcmp:
if strcmp(Units, 'mpg')
disp(x)
elseif strcmp(Units, 'kmpl')
disp(y)
end
If you post your code as text, the readers could post some improvements by copy&paste. The screenshot forces us to retype your code again.
Instead of creating x and y, it is more efficient to define only the string, which is used.
NUM2STR calls SPRINTF internally, so you can omit it, if it is an argument of SPRINTF.
Instead of creating a char which is used as input of DISP, you can write directly by FPRINTF:
if strcmp(Units, 'mpg')
fprintf('Your fuel economy is %g mile per gallon\n', mpg);
elseif strcmp(Units, 'kmpl')
fprintf('Your fuel economy is %g km per liter\n', kmpl);
end

⋮
Thank you very much! I appreciate you taking the time to answer my question! I hope you have a great day!