Get a free trial
View pricing

Simulink 3D Animation™ links Simulink® models and MATLAB® algorithms to 3D graphics objects in virtual reality scenes. You can animate a virtual world by changing position, rotation, scale, and other object properties during desktop or real-time simulation. You can also sense collisions and other events in the virtual world and feed them back into your MATLAB and Simulink algorithms. Video from virtual cameras can be streamed to Simulink for further processing.

Simulink 3D Animation includes editors and viewers for rendering and interacting with virtual scenes. With the 3D World Editor, you can import CAD and URDF file formats as well as author detailed scenes assembled from 3D objects. The 3D world can be viewed immersively using stereoscopic vision. You can incorporate multiple 3D scene views inside MATLAB figures, and interact with the virtual world using a force-feedback joystick, space mouse, or other hardware device. Simulink 3D Animation supports X3D, an ISO standard file format and run-time architecture for representing and communicating with 3D scenes and objects. 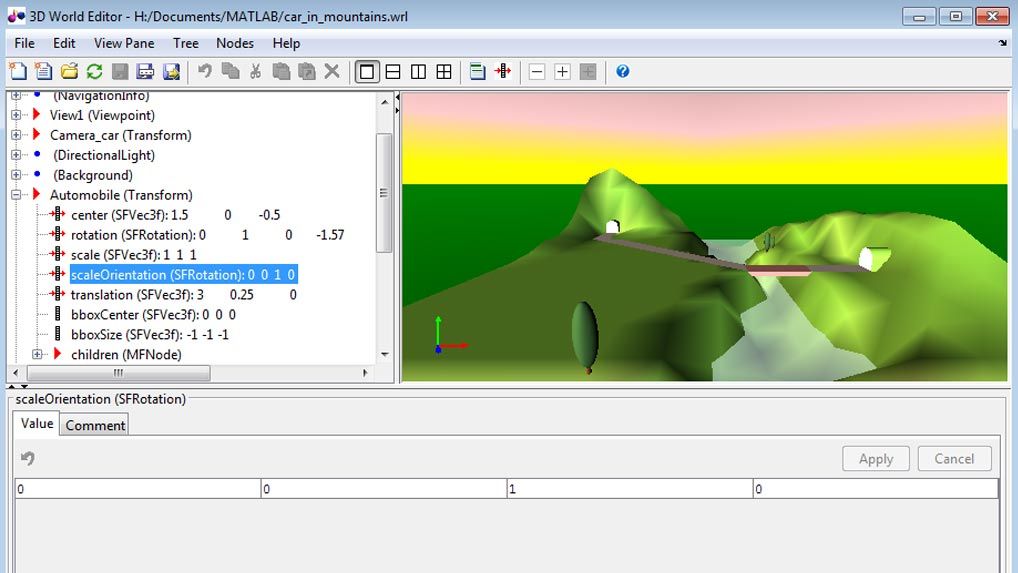 The 3D World Editor offers a hierarchical view of VRML objects that make up the virtual world. It contains object, texture, transform, and material libraries that are stored locally for easy access. 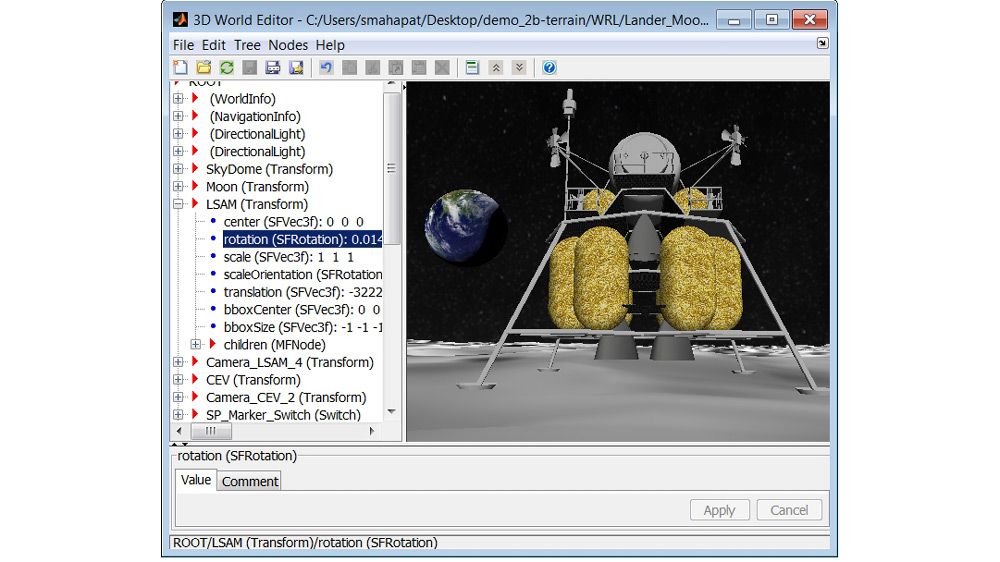 You can build 3D worlds with several 3D authoring tools and export them to the X3D or VRML97 format for use with Simulink 3D Animation. In addition, you can download 3D content from the web and use it to assemble detailed 3D scenes. 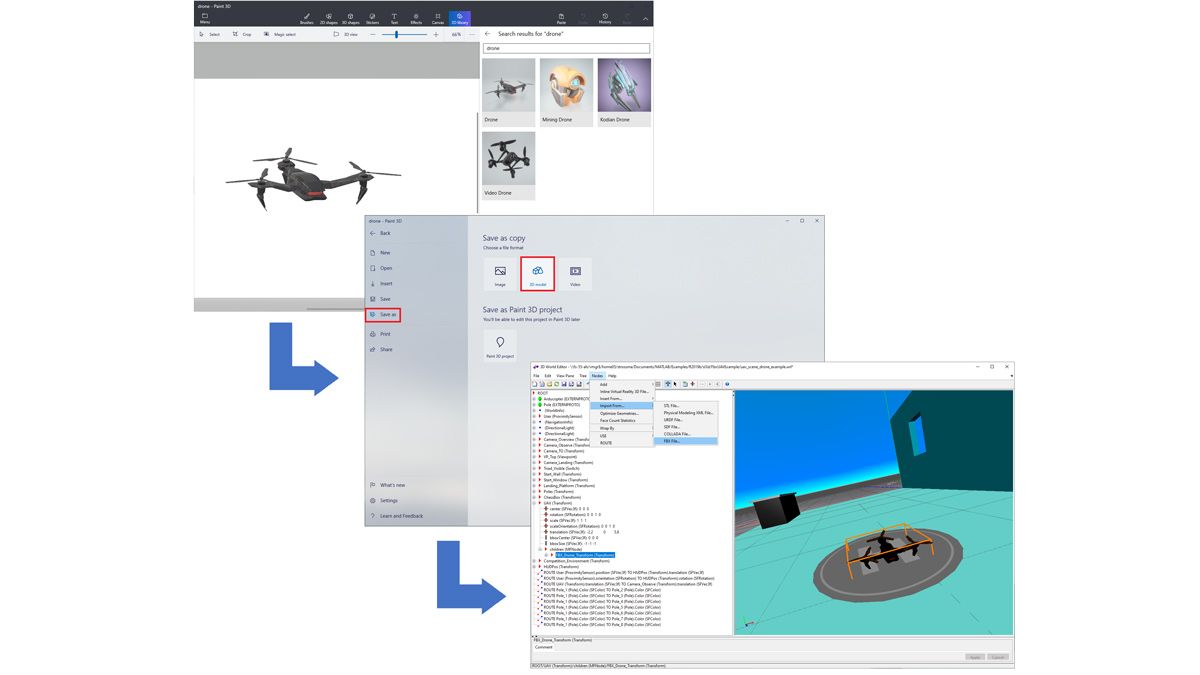 Drone imported from a Paint 3D library, saved as an FBX file, and loaded into a 3D world.

View, zoom, pan, and move in your virtual worlds, including in stereoscopic vision.

Simulink 3D Animation includes viewers that let you navigate the virtual world by zooming, panning, moving sideways, and rotating about points of interest known as viewpoints. Establish viewpoints to emphasize areas of interest, guide visitors, or observe an object in motion from different positions. During simulation, you can switch between these viewpoints. 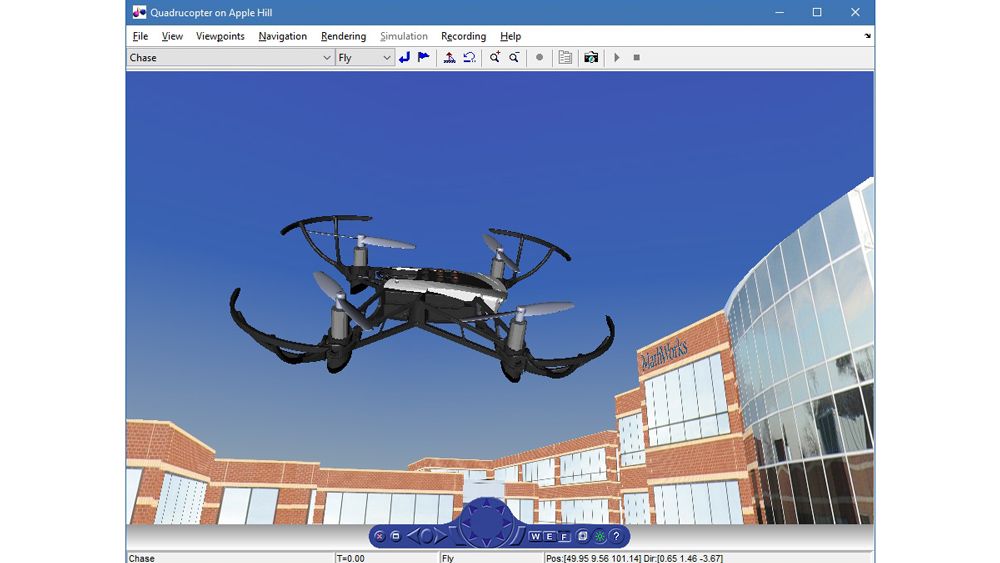 Visualization of a minidrone flight path.

The Simulink 3D Animation Viewer integrates with MATLAB figures so that you can combine virtual scenes with MATLAB Handle Graphics® and multiple views of one or more virtual worlds. 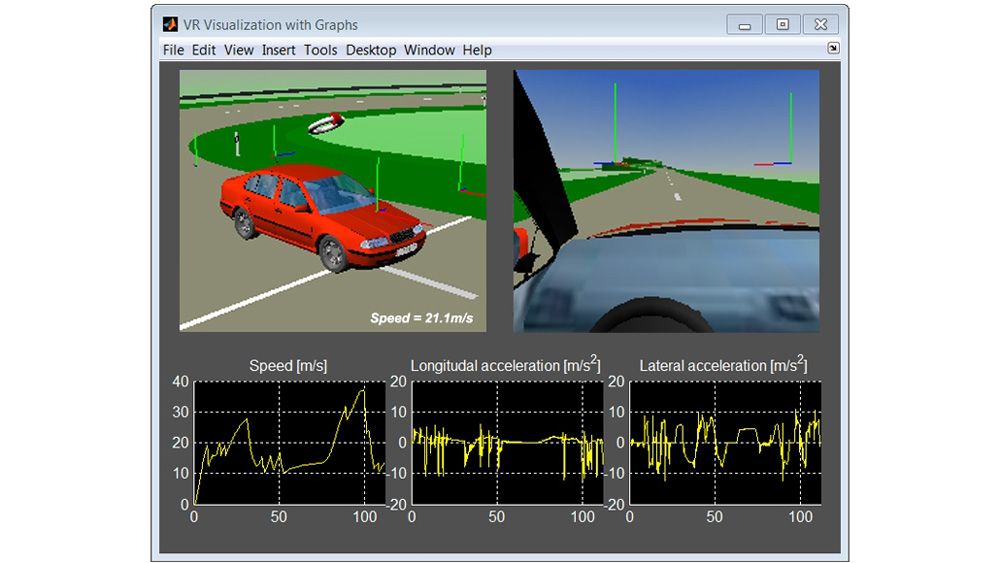 Example of a graphical interface authored with MATLAB Handle Graphics.

Remote Viewing of 3D Worlds in a Web Browser 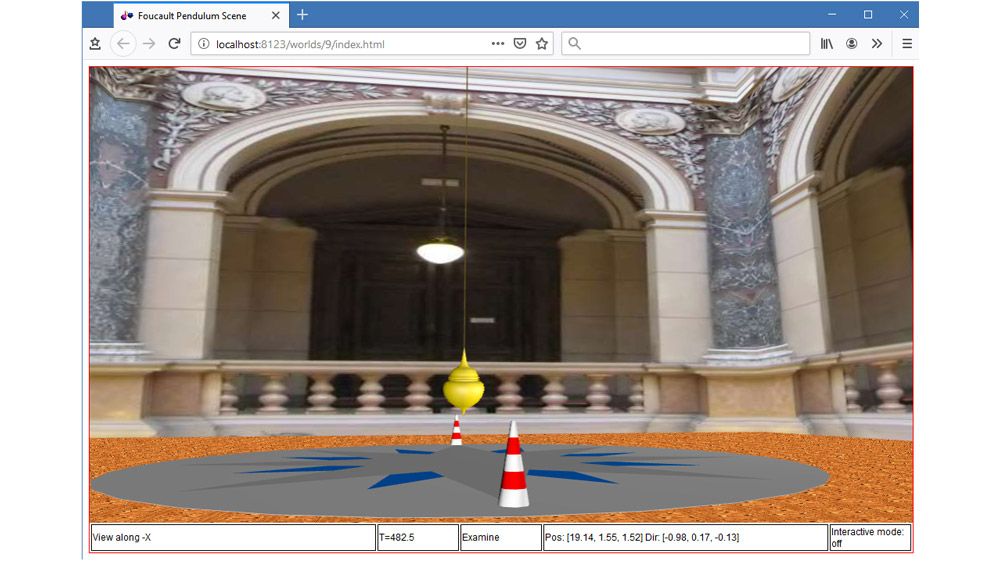 3D animation of a Foucault pendulum in an HTML5-enabled browser.

From MATLAB, you can read and change the positions and other properties of VRML objects, read signals from VRML sensors, create callbacks from graphical tools, record animations, and map data onto 3D objects. Use MATLAB Compiler™ to generate standalone applications that include Simulink 3D Animation functionality. 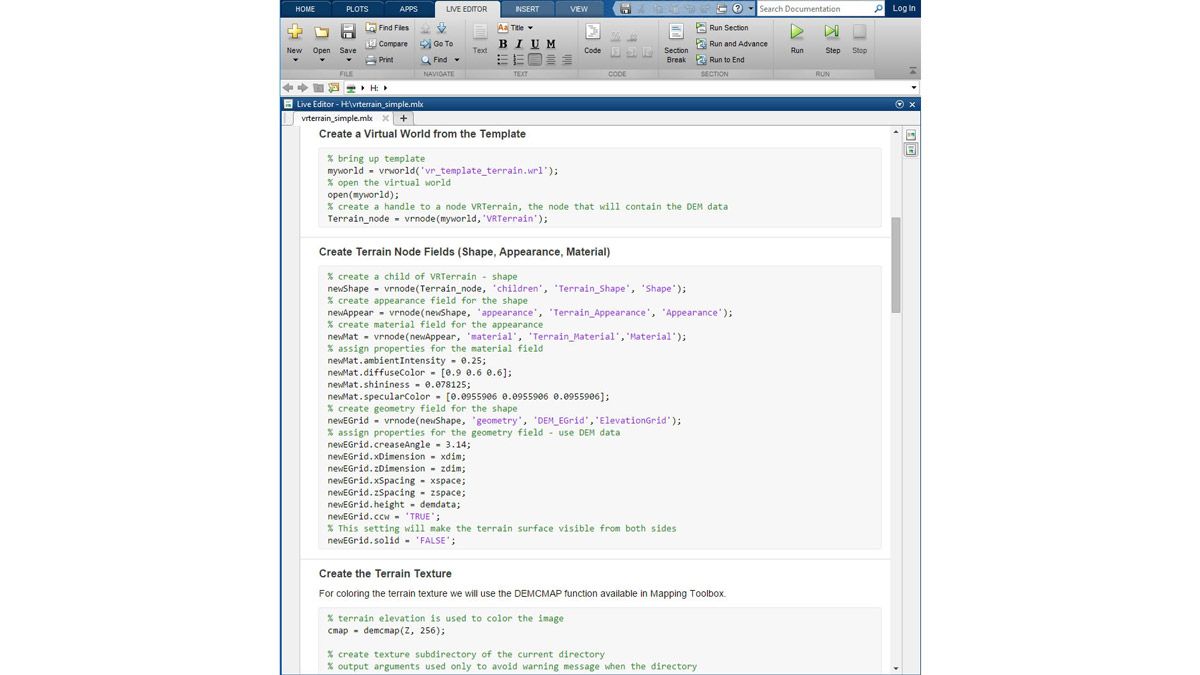 From Simulink, control the position, rotation, and size of a virtual object in a scene to visualize its motion and deformation. During simulation, object properties in the scene can also be read into Simulink. You can adjust views relative to objects and display Simulink signals as text in the virtual world. 2D outputs of synthetic cameras defined in the virtual world can be streamed into Simulink for video processing. You can also trace the 3D trajectory of an object in the associated virtual scene. 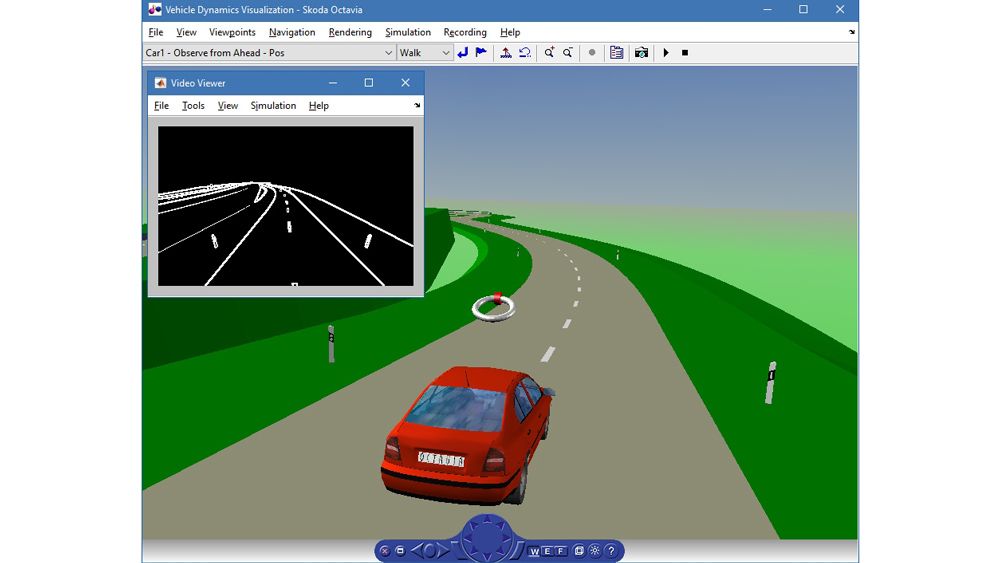 Simulation of vehicle dynamics. 2D output of a synthetic camera attached to the car is processed using a video processing algorithm and displayed in a video viewer window.

Simulink 3D Animation provides Simulink blocks and MATLAB objects that enable you to use hardware input devices (including 3D mice and force-feedback joysticks) to manipulate objects in virtual worlds. These can also be used to drive any Simulink block or control MATLAB based algorithms. 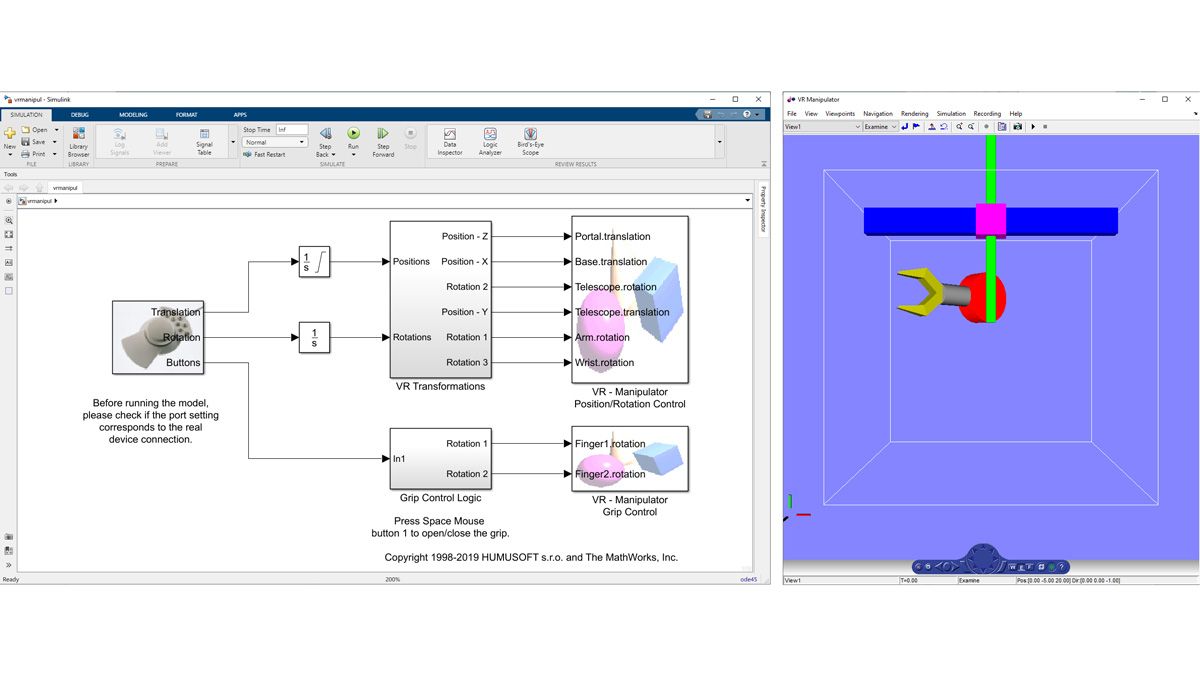 Model in which a space mouse is used to control a manipulator in the virtual scene. The device provides to Simulink information about translation and rotation of its controller cap and status of its buttons.

Use collision data as inputs to your MATLAB and Simulink algorithms.

Use C code generated from Simulink models with Simulink Coder™ to drive animations. Enhance your hardware-in-the-loop simulations or rapid prototyping applications on Simulink Real-Time™ and Simulink Desktop Real-Time™ by providing a visual animation of your dynamic system model as it connects with real-time hardware. 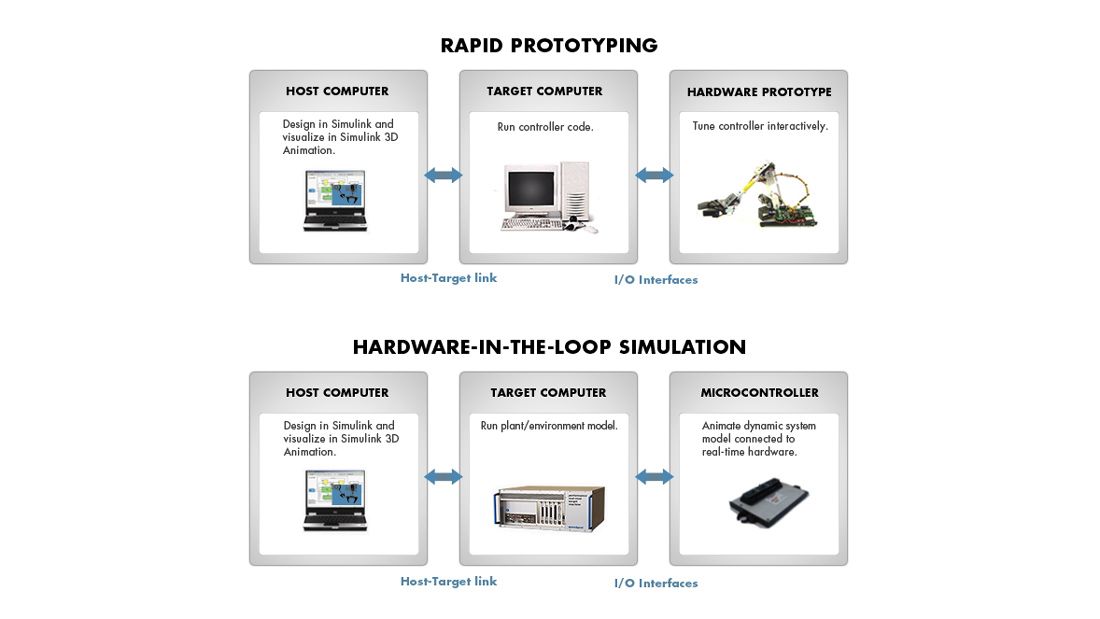 Get a Free Trial

30 days of exploration at your fingertips.

Are You a Student?

Your school may already provide access to MATLAB, Simulink, and add-on products through a campus-wide license.

What’s New in the Latest Release of MATLAB and Simulink