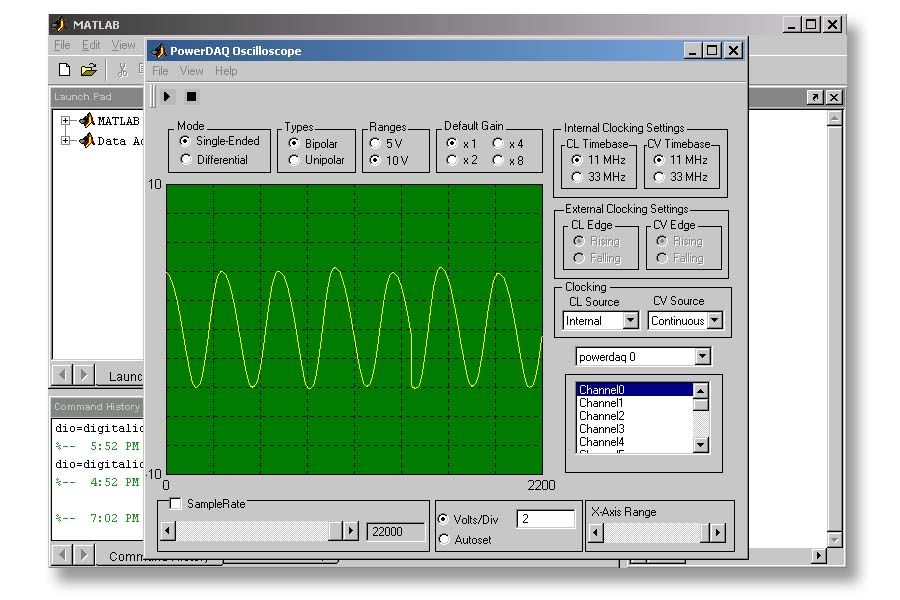 PowerDAQ cards plug into the PCI or PXI/compact PCI bus and can digitize analog inputs with instrument-grade quality as well as generate analog outputs and work with digital I/O. Our MF Series multifunction cards use an onboard DSP to enable simultaneous full-speed operation of analog I/O and digital I/O subsystems. The MFS Series of simultaneous sampling boards dedicate high-precision analog circuitry to each input to guarantee true simultaneous sampling at rates to 2M samples/sec. Further, the AO Series of analog output cards features models with as many as 96 independent channels, while the DIO digital I/O line feature as many as 128 points on one card. Finally, our software drivers support operation under all popular programming languages and operating systems including Linux, Real-Time Linux, and QNX.

MATLAB users can communicate directly with UEI's PowerDAQ hardware using the MATLAB Data Acquisition Toolbox with a driver that is included at no charge along with the PowerDAQ Software Suite. This allows you to bring data directly into MATLAB for analysis, visualization, and modeling. The Data Acquisition Toolbox provides a direct and consistent interface to each device while exposing the inherent features of the hardware.