The video walks you through the different types of messages, including downlink assignment and uplink grant, and how they are encoded and modulated and then mapped to the 5G New Radio slot via the PDCCH or physical downlink control channel. In the process, you will learn the concepts of resource element groups and control channel elements, the basic units to map control to the OFDM grid.

This is a new episode of our series, "5G Explained." In this video, we discuss downlink control information or DCI in 5G New Radio. We will look at its content, how it is encoded and modulated, then mapped to the 5G New Radio slot via the PDCCH or physical downlink control channel. In the process, we will introduce the concepts of resource element groups and control channel elements.

Downlink control information, or DCI, carries control information used to schedule user data, PDSCH on the downlink and PUSCH on the uplink. It is carried by the PDCCH or physical downlink control channel. It indicates the location in time and frequency of the data that is scheduled for transmission, the modulation and coding schemes used, the number of antenna ports or layers, as well as other aspects such as HARQ. The user equipment needs to decode the DCI before they can decode downlink data or transmit uplink data.

Depending on the content of a DCI, one or more of several formats can be used. Format 0 is for uplink grant, meaning that it contains information that pertains to data the UE is about to transmit on the uplink. Format 1 is for downlink allocation. This means it includes information about the way data was sent to the UE as discussed on the previous slide.

Downlink control information uses polar code for error protection. This is the main difference with encoding in LTE where tail-biting convolutional encoding was used. Another difference with LTE is that the CRC used here is longer at 24 bits instead of 16 for LTE. The CRC value is scrambled with a UE identifier called the radio network temporary identifier or RNTI in order to indicate which UE the message is intended for. You can see how MathWorks 5G Toolbox lets you succinctly describe this processing chain with a few lines of MATLAB code.

After encoding, downlink control information is scrambled, QPSK modulated, and mapped to resource blocks with a very specific pattern. We will explain this mapping in more detail in the next few slides as well as in another episode of this "5G Explained" series about core sets. Here again, you can see how MathWorks 5G Toolbox models the PDCCH processing chain with a few lines of code.

As in LTE, the UE must look for and decode the PDCCH, and there are several possible candidate search spaces and configurations. But there are several significant differences with LTE, some of which will be explained in much more detail in another episode of this "5G Explained" series. First, the PDCCH may not span the complete 5G bandwidth, whereas in LTE it always does. This is important because the bandwidth may be much larger, up to 400 megahertz in 5G, and UEs in 5G are not required to support a large bandwidth, opening the door to simpler, cheaper devices.

Second, PDCCH in 5G supports device specific beamforming. This means control information can be beamed toward a particular UE. This is possible because a PDCCH has associated DMRS, or demodulation reference symbols, which undergo the same beamforming. It is similar to the concept of EPDCCH that was introduced late in LTE deployment. Note that PDCCH is mapped to a CORESET or control resource set, a concept that defines the location of a control region within the 5G resource grid and is the object of another episode of this "5G Explained" series.

Let us now look at two concrete examples of DCI usage, first for downlink data scheduling. The UE looks for the PDCCH, and if a match is found, meaning that a block decoded with a CRC that matches the RNTI of the UE, it parses the DCI and extracts all information about where in time and frequency the data is located and how data was sent to the UE. With this information, the UE can grab the relevant parts of the 5G grid, perform channel estimation, equalization, inverse rate matching, and decoding to retrieve the downlink data packet.

For uplink transmission, downlink control information carrying an uplink grant comes in response to a scheduling request from the UE. When the receives the scheduling request, it makes all the decisions about when and how the UE should transmit the data that is ready for transmission. Those parameters include--besides the time and frequency, location, and modulation and coding scheme--other information such as precoding, which comes in the form of an index that points to a table of possible precoding matrices.

There is more information about this scheme in another episode of this "5G Explained" series about channel sounding. After decoding the control information for the uplink grant--remember, this would be format 0_0 or 0_1--the UE transmits uplink data according to those parameters.

One control channel element corresponds to six resource element groups. This means that once CCE includes 6 times 12 equals 72 resource elements. Of those, 54 are available for the PDCCH itself, and 18 are reserved for associated DMRS or demodulation reference symbols, which let the UE perform channel estimation, which is account for propagation channel effects including beamforming.

Finally, one PDCCH is mapped to one or more CCEs. The standard defines several aggregation levels as in LTE, except for the introduction of a new level of 16, which was not available in LTE. Clearly, the higher the aggregation level, the more resources are used, but the more possibility for redundancy and, hence, increase range.

Note that the configuration here shows a grid of three by two resource element groups for one CCE, but the actual configuration could be different, for example, six by one, or two by three. We will show more detail in another episode of this "5G Explained" series about CORESETs. This concludes this episode of the "5G Explained" series on downlink control transmission.

Get a free 5G Toolbox trial 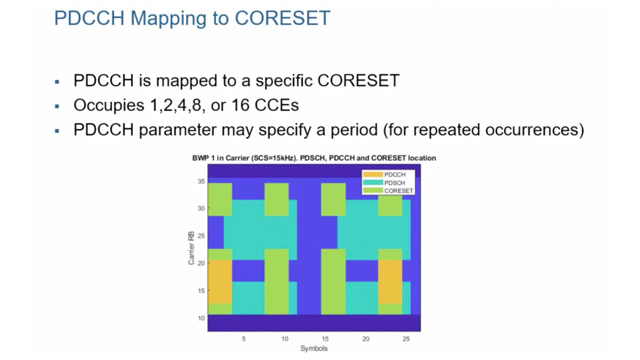