With constant coefficients in a differential equation, the basic solutions are exponentials est. The exponent s solves a simple equation such as As2 + Bs + C = 0.

OK. So today is unforced-- that means zero on the right-hand side, looking for null solutions-- damped-- that means there is a coefficient B in the first derivative. And what's the solution? This is really a basic, basic equation. In many applications, A would be the mass.

In a spring, for example, A would be a mass. B is the damping, the friction. And C is the spring constant, the force that pulls the mass back. Or in electronics, B would be the resistance. It's giving some friction, giving some heat.

So that's our equation. Just we have to be able to solve it. And we want to look for exponentials. A pure exponential is just right for a constant coefficient equation like that. So I'll substitute y equals e to the st. And what happens?

Well, so there's a C e to the st. That's a Cy. The derivative brings down an s. Two derivatives bring down s squared. So I simply have As squared, Bs, and C all together, multiplying e to the st. And how'd I get 0? Well the 0 is not going to come from e to the st, so it has to come from this.

So fundamentally, the whole video and more is about a quadratic equation. As squared plus Bs plus C equals 0. We have to solve it. We have to understand how does the answer depend on these numbers, A and B and C, the constants? OK?

So we know the route. We know the solutions. The quadratic formula tells us that the two solutions-- there are always two, but they could be equal-- have this-- do you recognize this expression?

So here are the possibilities. B could be 0. That puts us back in a previous video when the solution was a pure complex exponential, pure sine cosine. There was no damping. It just oscillated forever. That's the one we know.

Now, the new ones with a B are B squared could be smaller. So that's only a little damping. And in that case, what does the solution look like? If B squared is smaller than 4AC, I have to always look back here. So I have something negative.

A little different from the natural frequency. It's called the damp frequency. Not quite as frequent. The damping slows the oscillation down a little bit, but it brings in exponential decay. I'll draw a picture this time or next time of the solution, e to the minus st.

But you see, e to the minus st is decaying to 0. It's like a spring that's slowly winding down to 0. But it's oscillating as it does it. OK. Now, we've got two more possibilities here.

And these are just fun to get straight. There's the next one. When B squared is exactly 4AC. Exactly 4AC. B squared over 4AC, that's going to be the critical ratio here. And here that ratio is 1. And in that case, that square root is nothing. The square root of B squared minus 4AC is 0. So we get s1 and s2 equal. Two equal frequencies.

Real numbers. They're the minus B over 2A. So s1 and s2 are both minus B over 2A. That's just the edge between the decay with oscillation from underdamping. And the opposite extreme is overdamping. Overdamping, when B squared is bigger than 4AC, then our formula-- we're always looking back at that quadratic formula. B squared bigger than 4AC, this is real. Square root of a positive number. It's perfectly real.

So in that case, we have two, s1 and s2. Oh, let me draw you some pictures. I'll draw you the parabola, the As squared. So this is a graph of As squared. Let me plot As squared plus Bs plus C.

So in this overdamping case, we might have a lot of damping. B is pretty large. And that would be-- this direction is s. And I'm graphing here s squared plus-- well, let me see. I think probably plus 2s. And now I'm going to choose this-- oh, actually, plus 0 to get that one.

Critical damping. Critical damping. This is the case s squared plus 2s plus 1. Which is exactly s plus 1 twice. And it has that repeated root, which we always recognized as the marginal case when it doesn't go below, but it doesn't stay above either. It hits here twice.

So the root is minus 1 twice. That's critical. And now what? Increase this constant C even further. You'll lift the graph, lift the parabola up here. Lift it by one more, let's say. And what's going on there?

So this would be s squared plus 2s plus 2. And you see what that graph is telling us. It's telling us there are no roots, no real roots. This is a real graph in the real plane, and it's never 0. This is s plus 1. This is the case when I have s plus 1 squared plus 1. Can't be 0. Never 0.

So this has-- sorry. With the 2 there, it has damping. It has damping, but it's underdamping. The roots are complex. So this s plus 1 squared is 0. What are the roots of that? s is minus 1 plus or minus i. That's the case of underdamping. So let me write that.

We see so much from these graphs. So this was a graph in which I changed the constant term, the capital C, the stiffness, k. So that lifted the graph. And eventually the roots were complex. They weren't real anymore, because the parabola didn't cross the axis anymore. The roots are where it crosses the axis.

So that's one. I'll draw in the next video another picture. Maybe change B. Change the damping. So what would happen if I change the damping? If there's no damping, the roots are pure imaginary. Yeah. Let's just go back through those four possibilities, because that's what you have to learn.

If B is 0, there's no damping at all. And we're back in the pure oscillation, where is pure imaginary. We're just seeing cosines and sines. Then if we add a little damping, there appears a decay turn. If we add-- I could even draw these possibilities.

Let me draw the solution y of t, against t. OK. So underdamping-- the solutions say it starts there-- will oscillate, but decay. So this is underdamping. And you remember when that happens? That's when B is present but smaller. B squared is smaller than 4AC.

Overdamping, if it starts, let's say, here, it will going to 0, probably with no oscillation at all. It could have one oscillation. Depends how it starts. So ooh, let me make this picture. So that one is the overdamping. This guy is the underdamping. Underdamping still has oscillations. Overdamping has, at most, once. It could cross once. But overdamping is B squared bigger than 4AC.

OK. There's more to do. This is so central that you have to think about the ratio of B squared to 4AC. That has its own name. And it's a damping ratio, or the square of a damping ratio. And we identify all these solutions.

Does everybody know where the solution will be when B is 0? No damping at all. In that case, it will just oscillate. So my picture is getting, you could say, a little messed up. But this pure oscillation would be the B equals 0 with undamped.

OK. That's a first look at quadratic equations. As squared plus Bs plus C. It has the big name characteristic equation, but you could see, it's the fundamental equation for a second order differential equation. So we'll see more of it. Thanks. 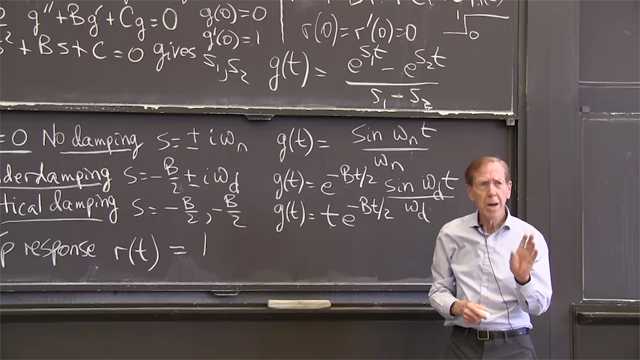