A box in the air can rotate around its shortest and longest axes. Around the middle axis it tumbles wildly.

OK. Here's an example that's more or less for fun. Because you'll see me try to do it. You can do it better. I call the problem the tumbling blocks. Only in this example, in my demonstration, it's going to be a tumbling book.

I'm going to take a book, the sacred book, and throw it in the air. And I'll throw it three different ways. And the question is, is the spinning book stable or not? And let me tell you the three ways and then give you the three equations that came from Euler.

So the first throw will spin around the very short axis, just the thickness of the book, maybe an inch. So when I toss that, as I'll do now, you will see if I can toss it not too nervously I hope. It came-- it was stable. The book came back to me without wobbling.

Of course, my nerves would give it a little wobble, and that wobble would continue. It will be only neutrally stable. The wobble doesn't disappear. But it doesn't grow into a tumble. OK. So that's one axis, the short axis.

Then I'll throw it also around the long axis, flipped like this. I think that will be stable too. And then, finally, on the intermediate axis, is middle length axis. Notice the rubber band that's holding the book together. Holding so the pages don't open. And this, we'll see, I think, will be unstable.

And similarly, throwing a football, throwing other Frisbees, whatever your throw. Any 3D object has got these three axes: a short one, a medium one, and a long axis. And the equations will tell us short and long axes should give a stable turning. And the in between axis is unstable.

No doubt, that's probably telling me that the total energy, the kinetic energy, is constant. After I've tossed that book up in the air, I'm not touching it. It's doing its thing. And it's not going to change energy because nothing is happening to it. It's just out there. Now there are other-- so that's a rather nice thing. This is a constant.

Now there's another way. If I multiply this one by 2x, and I multiply this one by y, and add just those two, that cancels. So 2x dx dt-- 2x times the first one-- and y times the second one gives 0. Again, I'm seeing something is constant. The derivative of something, and that something is x squared plus 1/2 y squared is a constant. Another nice fact. Another quantity that's conserved.

And as I'm flying around in space, this quantity x squared plus 1/2 y squared does not change. This sort of-- that involved all of xyz. And of course that's the equation of a sphere. So in energy space, or in an xyz space, our solution is wandering around a sphere. And this is the equation for, I guess, it's an ellipse. So there's an ellipse on that's sphere that it's actually staying on that ellipse.

And in fact there's another ellipse because I could've multiplied this one by 2z and this one by y and added. And then those would have canceled. Minus 2 xyz plus 2xyz. So that also tells me that it would be probably z squared plus 1/2 y squared equals a constant. That's another ellipse. z squared plus 1/2 y squared. You see this? If I take the derivative of that, I have 2z times dz dt plus y times dy dt. Adding give 0. The derivative is 0. The thing is a constant.

But! But, but, but! If I subtract this one from this one, take the difference of these two. Suppose I take this one minus this one. The 1/2 y squared will go. So that will tell me that x squared minus z squared is a constant. Oh, boy! I haven't solved my three equations. But I found out a whole lot about the solution. The solution stays on the sphere, wanders around somehow. It also at the same time stays on that ellipse. And it stays on that ellipse. But this is not an ellipse, not an ellipse. That's the equation of a hyperbola. And that's why-- which, of course, goes off to infinity. And that's why the-- well, it goes off to infinity, but it has to stay on the sphere. It wanders. This will be responsible for the unstable motion.

Again, here are my three equations. We're up to three equation, so we're going have a three by three matrix. And first I have to find out the critical points, the steady states of this motion. How could I toss it so that if I toss it perfectly it stays exactly as tossed? And the answer is, around the axis.

If I toss this perfectly, with no nerves, it'll just spin exactly as I'm throwing it. The x, y, and z will all be constant. Now, when I toss it on that axis. I'm looking for-- here are my right hand side. YZ, minus 2XZ, and XY. And I wrote those in capital letters because those are going to be my steady states. Now I'm looking for are points where nothing's happened.

If those three right hand sides of the equation are 0, I'm not going to move. xyz will stay where they are. So can you see solutions of those three equations? Well, they're pretty special equations. I get a solution when, for example, solutions could be 1, 0, 0/

And I finally have to do the axis that we're all intensely waiting for, the middle axis. And the middle axis is when the book starts tumbling, and it's going to be a question of whether I can catch it or not. May I try? And then may I find-- what am I expecting on the neutral axis? I'm expecting instability. I think actually it will be a saddle point. But there'll be a positive eigenvalues.

There will be a positive eigenvalue. And it is responsible for the tumbling, the wild tumbling that you will see. And it's connected with the point staying on this hyperbola that wonders away from-- so it's this one now that I'm doing. This guy is the-- I'll put a box around-- a double box around it. That's the unstable one, which I'm about to demonstrate.

Ready? OK. Whoops. OK. It took two hands to catch it. Let me try it again. The point is it starts tumbling, and it goes in all directions. It's like a football, a really badly thrown football. It's like a football being thrown that goes end to end. The whole flight breaks up, and the ball is a mess. Catching it is ridiculous. And I'm doing it with a book. Yes. You saw that by watching really closely. OK. Better if you do it.

This is now the-- this was the first derivative matrix, the Jacobian matrix, at this point, corresponding to the middle axis. OK. Again, I'm seeing some 0s. I'll reduce this to that two by two matrix and this matrix. Really, I have this two by two matrix in the xz, and this one in the y. How about that guy? 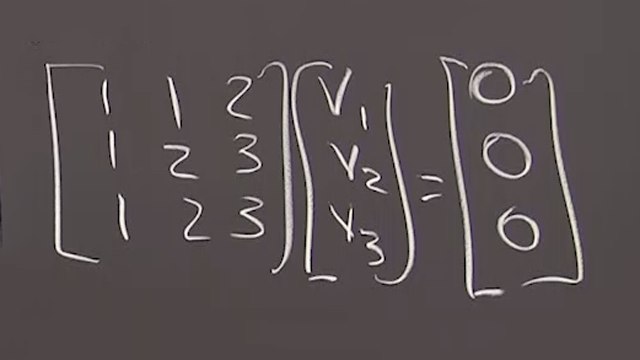