Modeling and Simulation of Walking Robots

From the series: Modeling, Simulation and Control

Join Sebastian Castro as he outlines a simulation-based workflow for modeling and controlling a bipedal walking robot using Simscape™ and Simscape Multibody™.

First, you will learn how to model the rigid-body mechanics of a walking robot using Simscape Multibody. You can use MATLAB® variables to define the geometric and inertial parameters of the robot such that they can be tuned. Alternatively, you can import an existing robot model supported CAD platforms such as SolidWorks or Onshape, or from URDF files. You will also see how to model physical contact between the feet and ground.

Then, you will explore how to trade off various levels of model fidelity for the joint actuators and controllers. Starting from ideal motion-actuated joints, Sebastian will also model closed-loop torque controllers using Simulink® and detailed mechatronic actuator dynamics using Simscape Electrical™.

You can find the example models used in this video on MATLAB Central File Exchange. 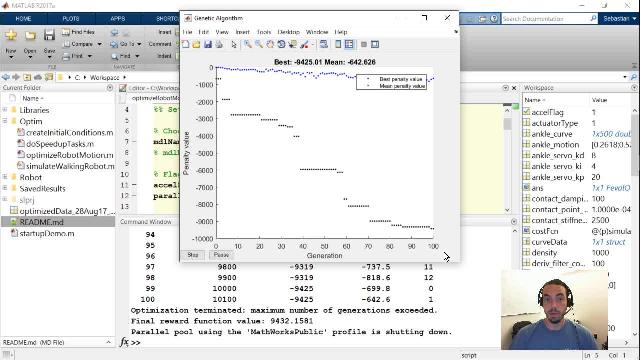