ODE1 implements Euler's method. It provides an introduction to numerical methods for ODEs and to the MATLAB suite of ODE solvers. Exponential growth and compound interest are used as examples.

Hello. I'm Cleve Moler, one of the founders and chief mathematician at The MathWorks. This series of videos is about solving ordinary differential equations in MATLAB. We can begin by recalling the definition of derivative. The derivative of a function at a point is the slope of the tangent line to the graph of the function at that point.

Leonhard Euler was a 18th century Swiss mathematician, probably the most influential mathematician of his era. He made important contributions to a wide range of fields in mathematics, physics, and astronomy. He invented the notion of function, for example.

Euler's method actually isn't a practical numerical method, in general. We're just using it to get us started thinking about the ideas underlying numerical methods. Euler's method involves a sequence of points t sub n, separated by a fixed step size h. And then y sub n is the approximation to the value of the solution at t sub n.

The approximation comes from the slope of the secant, the ratio of the difference of the values of y and to the step size h. The differential equation says that this ratio should be the value of the function at t sub n. And if we rearrange this equation, we get Euler's method, that yn plus 1 is yn plus h times the function f evaluated at d sub n and y sub n. This is Euler's method.

We're now ready for our first MATLAB program, ODE1. It's called ODE1 because it's our first program and because it evaluates the function f that defines the differential equation once per step. There are five input arguments. The first is f, a function that defines the differential equation. This is something called an anonymous function. I'll talk more about that in a moment.

The other four are scalar numerical values. The first three define the interval of integration. We're going from t0 in steps of h to tfinal. The fifth input argument is y0, the initial value. The output is a vector. Vector yout is the values of the solution at the points in the interval.

We start by putting y0, the initial value, into y and then putting y into the output vector. The body of the function is a for loop. t goes from t0 in steps of h up to one step short of tfinal, and then the final passage through the body of the code takes t up to tfinal.

We evaluate the function f at t and y. That gives us a slope s. s is for slope. Here's the Euler's step. Take the current value of y. Add h times the slope. That gives us a new value of y. And then y is appended to yout. This MATLAB construction with the square brackets takes a vector y, adds another value to it, making it one element longer, and puts the result back in yout. This is the entire code. This is it. This is ODE1 that implements Euler's method.

The first argument to any of the MATLAB ODE solvers is the name of a function that specifies the differential equation. This is known as a function handle. The easiest way to get a function handle is to make use of an anonymous function created with the ampersand or at sign. All of the differential equations involve anonymous functions of two variables, t and y. And so we have f equals at parentheses t comma y closed parentheses. This is followed by any expression involving either t or y. And many of them don't depend upon t.

So here's an anonymous function defining our interest problem. And we can just evaluate this like any ordinary function. When y is equal to 1, f of 1 is 0.06. Here's an example of a function that depends upon both t and y. The functions can involve constants that have values. So here we can define two constants. And then we can use those two constants to define the logistic equation, f of a times y minus b times y squared. Again, this is an autonomous equation that doesn't actually depend upon t.

Let's see how Euler's method and ODE1 work on this simple example, y prime equals 2y with the initial condition y of 0 equals 10 on the interval t between 0 and 3. We define the anonymous function, f of t and y is equal to 2y. The initial condition is t0 equals 0. We're going to take a step size of 1. Go to tfinal equals 3, starting at y0 equals 10. And here's our call to ODE1.

Take the second step to get to y2. y2 is 90. Evaluate the function there. Get 2 times 90 is 180. That gives us the slope. Take a step across the interval with that slope and get us to a third point. The third point is 270. And that's the end of the integration. So that's three Euler steps to get from t0 to tfinal.

MATLAB actually has a format for looking at dollars and cents. And so here they are as dollars and cents. Starting with $100 and compounding every month, we get up to just over $180. I'm going to plot that. So I want a time vector of months. 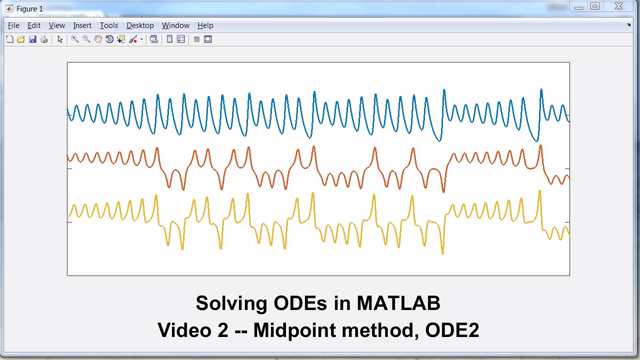