Regularization techniques are used to prevent statistical overfitting in a predictive model. Regularization algorithms typically work by applying either a penalty for complexity such as by adding the coefficients of the model into the minimization or including a roughness penalty. By introducing additional information into the model, regularization algorithms can deal with multicollinearity and redundant predictors by making the model more parsimonious and accurate.

Each regularization technique offers advantages for certain use cases.

Regularization is related to feature selection in that it forces a model to use fewer predictors. Regularization methods have some distinct advantages.

Let's assume that you are running a cancer research study. You have gene sequences for 500 different cancer patients and you're trying to determine which of 15,000 different genes have a signficant impact on the progression of the disease. You could apply one of the feature ranking methods like minimum redundancy maximum relevance and neighborhood component analysis, or univariate if you’re concerned about runtime; only sequential feature selection is completely impractical with this many different variables. Alternatively you can explore models with regularization. You can't use ridge regression because it won't force coefficients completely to zero quickly enough. At the same time, you can't use lasso since you might need to identify more than 500 different genes. The elastic net is one possible solution. 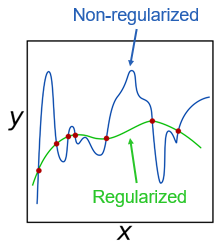 What Regularization does to a function y=f(x)

Understand the strengths of the most common classification models, learn how to correct and prevent overfitting, and see useful functions in MATLAB.