Jason on 7 Jan 2020
⋮
Answered: Cris LaPierre on 10 Jan 2020
After updating from 2019a to 2019b, I am having problems with figure maximize.
I have created a GUI using guide, and in the opening function I had used:
f = gcf;
f.WindowState = 'Maximized';
Which worked well. However in 2019b, its almost shifted (say about 1cm to the right and 1cm down, so my buttons at the bottom of the gui are now covered by the windows taskbar.
I have tried other versions too.
set(gcf,'WindowState','maximize')
as well as a jframe approach.
Its very strange, that in this strange state, if I press the maximise button on the figure, it does fill the screen correctly.
I did think perhaps I could put the x,y startting positions to zero (I was surprised one of them was negative!)
set(gcf,'WindowState','maximize')
pos=get(gcf,'Position')
pos(2)=0
pos(1)=0
set(gcf,'Position',pos)
But this doesn't help either, the orginal pos after "supposedly" maximising is:
pos =
6.7143 -1.7059 271.7143 60.8235
and after I force to zero,
pos =
0 0 271.7143 60.8235
But still its not behaving properly.
Here is the top left of my laptop screen: 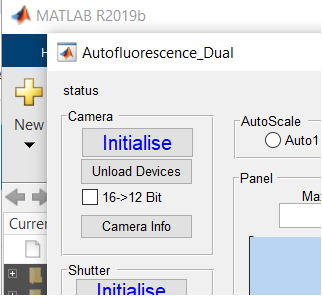 Cris LaPierre on 10 Jan 2020
⋮
If behavior has changed and you think it is a bug, you could try contacting technical support to report it. This is the best way to get an official reply. You can submit a bug report to technical support here.