⋮
hello
from a mathematical point of view , interpolating or extrapolating is not difficult
but which law do the Cd and Cl coefficients foolow vs reynolds number ??
I doubt that is is a simple linear / proportionnal law ..
so the output of the interpolate/extrapolate can be completly wrong if you do not consider first how the data should be generated .

⋮
this data is from windtunnel testing it is measured at two reynolds number: 400000 and 500000, in this program i plotted 2 lines in 3d space on is down low (RE = 400000) and the other is up high (RE = 500000) what i want to do is to connect these lines with a surface (this would be my crude interpolation) and to then (if posible) extrapolate set surface outside of the known reynolds numbers.

⋮
To be honest, I think you are all generous champs who give out their presious time for free to help a matlab learning 15 year old. I really think you guys are the all time best!

⋮
thanks for the nice comment even though I probably deserve only 1% of it, the rest goes to John

John D'Errico on 11 Jan 2021
⋮
Edited: John D'Errico on 11 Jan 2021
You lack sufficient information to construct a meaningful surface, since you have only 2 pieces of information in terms of Reynolds number.
First, plot what you have. A 3-d plot is effectively useless here, and makes it far more difficult to understand what you do have.
plot(Cl1,Cd1,'-or',Cl2,Cd2,'-*b')
legend('RE 400K','RE 500K')
xlabel 'Cl'
ylabel 'Cd' 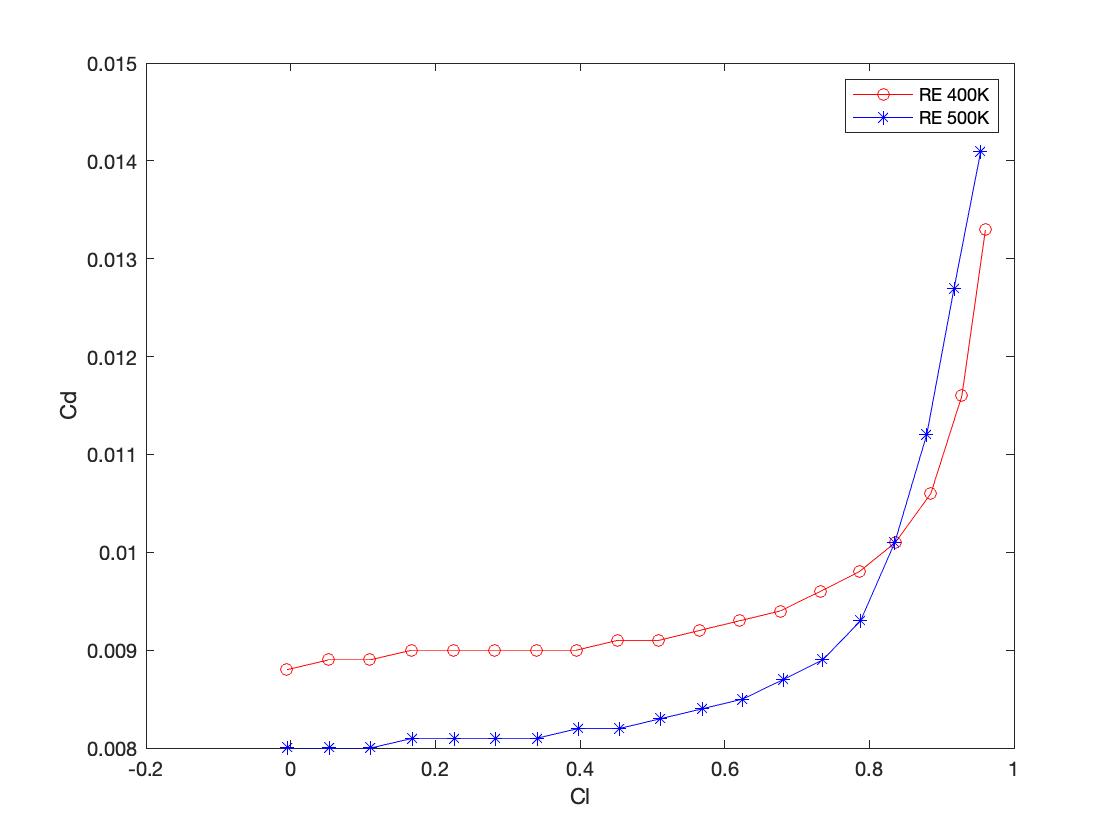 So we see two curves that are not terribly similar in shape. There is a bit of noise seen. And the abscissa for these two curves are not the same, so you could not just use a tool like interp2 to interpolate. Extrapolating those curves, or for Reynold's numbers that fall (significantly) outside the interval [4e5,5e5] would seem to be a foolish (risky) task, due to the high amount of curvature of the respective curves, and due to the noise in the data.
If you merely wish to predict a point for some other Reynolds number however, you could simply use a spline interpolant, a linear interpolant, or perhaps a smoothing spline for each curve. Then, since you have only two distinct Reynolds numbers and thus only two distinct curves, just use linear interpolation between the two. For example, if you have the curve fitting toolbox, I might do this:
CF1 = fit(Cl1,Cd1,'smoothingspline');
CF2 = fit(Cl2,Cd2,'smoothingspline');
CFinterp = @(Cl,Re) (5e5 - Re)/(5e5-4e5)*CF1(Cl) + (Re - 4e5)/(5e5-4e5)*CF2(Cl);
Cl = linspace(0,1,50);
Reinterp = 4.5e5;
hold on
plot(Cl,CFinterp(Cl,Reinterp),'g-')
legend('RE 400K','RE 500K','RE 450K') 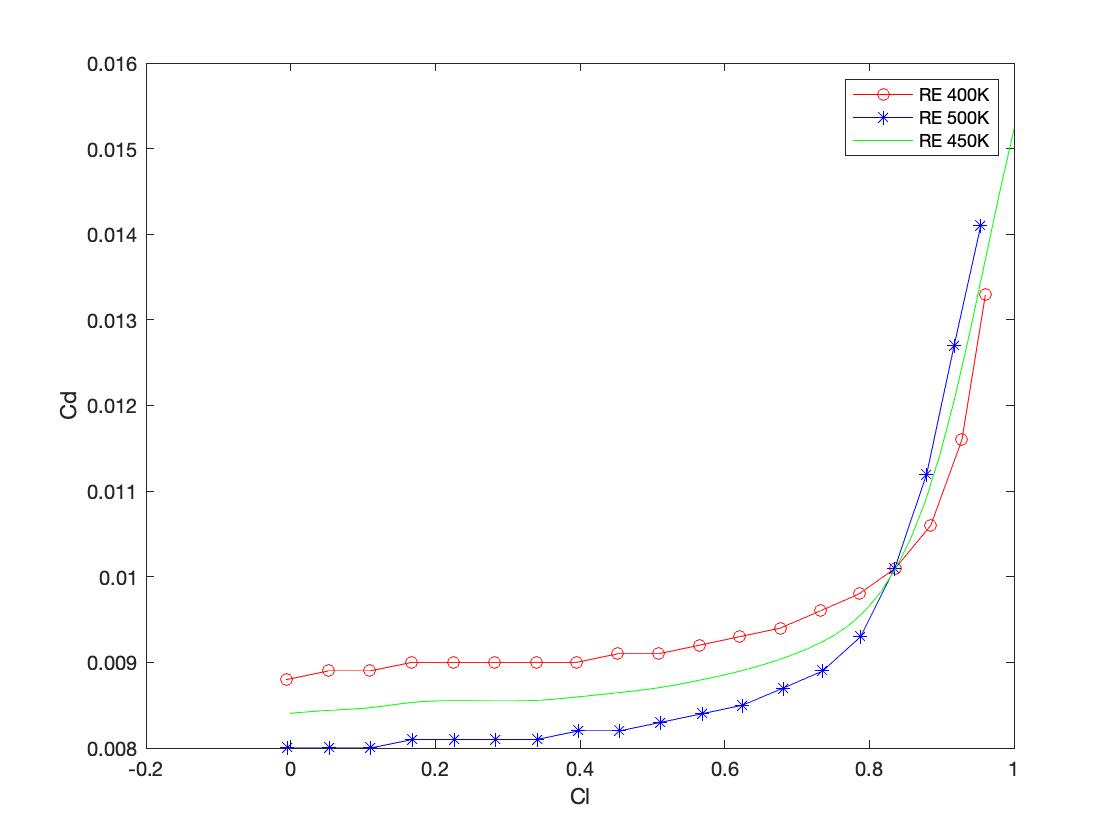 I hard coded the Reynolds numbers in the interpolant there, but it is easy enough to fix that.

⋮
o wow! thank you so much man! i see your point in the fact that i only have 2 reynolds numbers, i could find more data and plot a third or maybe fourth line with different reynolds numbers, would this make a significant differens in the way you attack this problem? 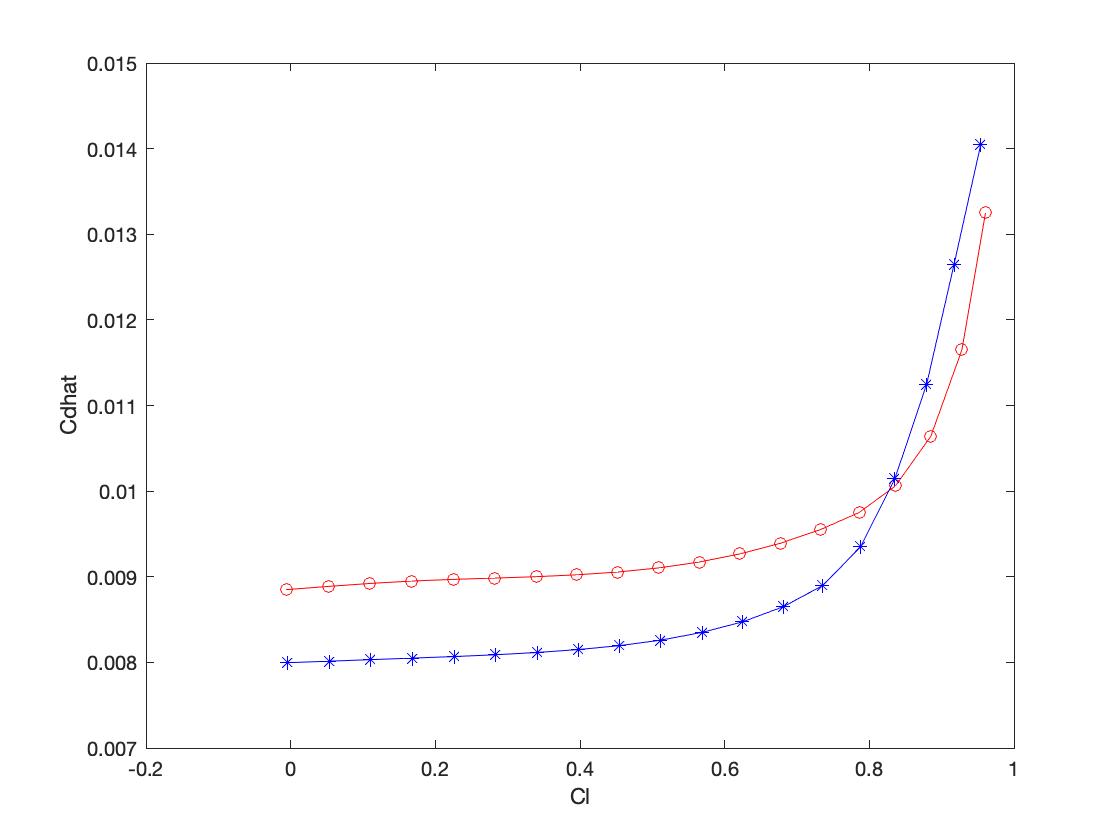 That has now dramatically improved your data. (I should probably post unround.m on the File Exchange someday. I don't think I ever did.) It suggests that your data is not in fact noisy, only that you sloppily allowed it to be rounded to 4 digits.
If you now had several such curves, now I might try building a scatteredInterpolant for Cd, as a function of the parameters Cl and Re. But before you could do that, you need the more accurate values for Cl, otherwise any interpolation will fail to perform well. The nice thing about scatteredInterpolant is it will allow you to create that surface as a function of the two variables.

⋮
Wow man, I really apologize for the duplicate question I hoped it would make the question a bit clearer. I really appreciate how you are helping me and I am now gathering the airfoil data and I will post it on here asap!