Transform each term in the linear differential equation to create an algebra problem. You can then transform the algebra solution back to the ODE solution, y(t).

So let me tell you what-- I use a capital letter for the Laplace transform of little f, a function of t. The transform is capital F, a function of s. And you'll see where s comes in. Or if it's the solution I'm looking at, y of t, its transform is naturally called capital Y of s. So that's what we want-- we want to find y, and we know f. OK.

So can I do an example? Well, first tell you what the Laplace transform is. Suppose the function is f of t. Here is the transform. I multiply by e to the minus st, and I integrate from 0 to infinity. 0 to infinity. Very important. The function doesn't start until t equals 0, but it goes on to t equal infinity.

I integrate, and when I integrate, t disappears but s is still there. So I have a function of s. Well, I have to do an example. So to find the Laplace transform is to do an integration. And you won't be surprised that the good functions we know are the ones where we can do the integration and discover the transform, and make a little table of nice transforms.

And the number one function we know is the exponential. So can I find-- for that function, I'll compute its transform. So what do I have to do? I have to integrate from 0 to infinity-- you might say 0 to infinity is hard, but it's actually the best-- of my function, which is e to the at. So that's my function times e to the minus st dt.

Infinity is the nice one. It's the easy one. I will look only at s's that are bigger than a. s larger than a means that this exponential is decreasing to 0. It gets to 0 at t equal infinity. So at t equal infinity, that upper limit of the integral ends up with a 0. So I just have to subtract the lower limit. And look how nice. Now I put in t equal 0. Well, then that becomes 1.

And I'm not surprised. So the answer is blowing up at s equal a. Well, of course. If s equals a, then this is the integral of 1 from 0 to infinity, and it's infinite. So I'm not surprised to see the pole showing up. The blow up showing up exactly at the exponent a. But this is a nice transform. OK.

I've integrated by parts. A very useful, powerful thing, not just a trick. OK. Now, can I recognize some of this? That is minus minus, no problem. I bring out-- that s is a constant. Bring it out, s. Now, what do I have left when I bring out that s? I have the integral of ye to the minus st dt. That is exactly the Laplace transform of y. It's exactly capital Y.

That's why the Laplace transform works. But now, here is a final term. y at infinity-- well, and e to the minus st at t equal infinity, 0. Forget it. So I just have to subtract off y at 0 times e to the minus st at 0, which is 1. e to the 0 is 1. So do you see that the initial condition comes into the transform? It's like, great.

So like there are two steps to using the Laplace transform. One is to compute some transforms like this one, and some rules like this one. That's the preparation step. That comes from just looking at these integrals.

So all the terms turn into that one. And now comes-- so that's big step one. Transform every term. Get an algebra problem for each s. We've changed from t, time in the differential equation, to s in Laplace transform.

Now solve this. So how am I going to solve that? I'm going to put y of 0 on to the right-hand side. And then I have Y of s times s minus a. So I will divide by s minus a. And that gives me Y of s. So that was easy to do. The algebra problem was easy to solve. The differential equation more serious.

OK. The algebra problem is easy. Are we finished? Got the answer, but we're in the s variable, the s domain. I've got to get back to-- so now this is going to be an inverse Laplace transform. That's the inverse transform. To give me back y of t equals what?

How am I going to do the inverse transform? So now I have the transform of the answer, and I want the answer. I have to invert that transform and get out of s and back to t. Well, y of 0 is a constant. Laplace transform is linear, no problem. So have y of 0 from that. And now I have 1 over s minus a.

So that 1 over s minus a, when I transform back, is the e to the at. And I'm golden. And that you recognize, of course, as the correct answer, correct solution to this differential equation. The initial value y of 0 takes off with exponential e to the at. No problem. OK.

Can I do the same idea, the central idea? Take my differential equation, transform every term. I've started with a time equation and I'm going to get an s equation. So again, dy dt minus ay, that transformed to-- what did that transform to? sY of s minus y of 0. Came from there. Minus aY of 0-- minus aY of s. Minus aY of s.

I've transformed the differential equation to an s equation. I've just done simple algebra to solve that equation. And I've got two terms. Two terms. You see that term? That's what I had before. That's what I had just there. The inverse transform was this. No problem. That's the null solution that's coming out of the initial value .

OK. So that will give me the same inverse transform, the growing exponential. But what does this one give? That's a key question. We have to be able to do-- invert, figure out what function has that transform? The function will involve a and c and t, the time. And s, the transform variable, will become t, the time period.

The problem is, right now I have both blow ups at once. So I'm going to separate that. And that's called partial fractions. So I will have to say more about partial fractions. Right now, let me just do it. That expression there, I'll take this guy away. Because it gives that term that we know.

It's this one. Is that one. It's this two poles thing that I want to separate those two poles. So this is algebra again. Partial fractions is just algebra. No calculus. No derivatives are in here. I just want to write that as 1 over s minus c. It turns out-- look. There's a way to remember the answer.

So now, are we golden? I can take the inverse transform with just one pole. So now that gives me the solution y from-- so this is just a constant, 1 over c minus a. And what is the inverse transform of this? That's the simple pole at c. It came from a pure exponential, e to the ct. Right?

And to see that, clearly we had to use this partial fraction idea which separated these two poles into one pole there, when s is c, and another pole, when s is a. We've got two easy fractions. The easy fractions each gave me an exponential. And the final result was this one. And I don't know if you remember that. That is the correct solution to the first order linear constant coefficient equation, the simple equation there, when the right-hand side is e to the ct. 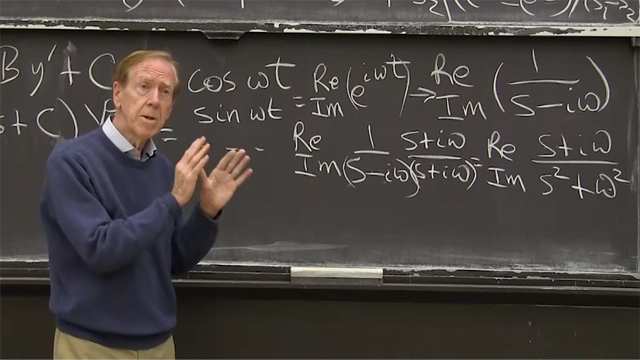