The second derivative transforms to s2Y and the algebra problem involves the transfer function 1/ (As2 + Bs +C).

OK, this is my second video on the Laplace transform, and this one will be about solving second order equations.

So let me remember the plan. So there's our second order equation. And I'm taking this example first, with the delta function on the right-hand side. You remember, that's a key example. And actually, we have a special letter for the solution. This is an impulse. And the solution is the impulse response. And I use a little g. So I should have turned this y into a g. So that g is the solution, starting from 0 initial conditions, with a delta.

So what's the plan? We want to take the transform of every term. We have to check, what is the transform, the Laplace transform of the delta function? You remember the definition of the transform. It's this integral. You take your function-- whatever it is, here delta-- multiply by e to the minus st, and integrate. s equals 0 to infinity.

And the second derivative, another s. So s squared, times g of s. We're not surprised to see the very familiar quadratic, whose roots are the two exponents s1 and s2, showing up here. We've seen this every time, because we have constant coefficients. We always see this quantity. And now we see that, look, the transform, capital G. I divide by that. It's exactly the transfer function. So that's connecting in the idea of the transfer function to the Laplace transform of the impulse response, because I have this in the denominator.

Right now, it's 1 over a quadratic. The whole idea of partial fractions is, split this so this G of s, final step. It's G of s. Well, you remember that this is the polynomial that has the two roots, s1 and s2. I'm going to write that as 1 over s minus s1, and s minus s2.

Those are the two roots from the quadratic formula-- the two poles, we could say, poles of G of s. And now I want to use partial fractions. So I want to separate this into two fractions. And it turns out that they are 1 over s minus s1, minus 1 over s minus s2. And it turns out there's a factor there to make it correct. You could check. When you put these, this over a common denominator, you get this. And when you put that over a common denominator, you'll get a numerator, which you have to cancel. OK.

So then, now I have two simple poles. And I could write here what I know, what g of t is. Remember, the function with that transform is just e to the s1 t. The one most important of all transforms is the transform of the exponential, is that simple pole.

So now I invert the Laplace transform. So this gives me an e to the s1 t, minus the function with that transform, is e to the s2 t. And I still have this constant, s1 minus s2.

I've re-discovered the impulse response. It's a solution to my equation with impulse force. And it's that particular function that plays such an important part in the whole subject of constant coefficient differential equations. Because you see it's the critical thing here. Here's the critical transfer function, and here is the inverse Laplace transform. The Laplace transform of that is that. Good. That's that example.

And now I just want to take another function than delta. OK. I could go all the way to take f of t, any f of t. But let me stay with examples. So now I'm going to do y double prime, plus b y prime, plus cy. They're all the most important example. The best one we could do would be cosine of omega t. An oscillating problem, with an oscillating force, at a frequency different from the natural frequency, and we also have damping there.

So this is the standard, spring mass dashpot problem, or RLC circuit problem, certainly RLC circuits, highly important. And you might remember the solution gets a little messy. A solution gets a little messy. It's highly important, but-- so I'll carry it through to the last step. But I probably won't take that final step. Just, what I want you to see is another example of the inverse Laplace transform.

But now I know the transform of e to the a t, e to the i omega t. So that transforms to-- so I want the real and the imaginary parts of 1 over, you remember what it is. It's just that simple pole again, s minus the exponent i omega.

So what I'm going to do is, real and imaginary parts of, I'll multiply s minus i omega. This is the key trick with complex numbers. It comes up enough, so it's good to learn. I multiply that by its conjugate, s plus i omega over s plus i omega. So I multiplied by 1.

I've transformed the cosine and the sine into s over this, and omega over this. So two at once, two transforms. And of course, as always, we're able to do, and recognize, and work with the transforms of a special group of nice functions, exponentials above all, sines and cosines coming from exponentials, delta functions. It's a short list. Those are the ones we can do, and fortunately those are the ones that we need to do.

OK, so I'm now ready to put in the right-- what did that turn out to be? It turned out to be s from the cosine, I'm not doing the sine now, the cosine. I'm taking the real part. It's s over that positive s squared plus omega squared. Are you with me? Left-hand side, all normal. I'm starting from 0 initial conditions, otherwise I would see the initial values in here. But I don't, because they're 0.

And over here, I've got the transform of the right-hand side. OK? Then I just bring that down there. So finally, I know y of s is s over this all-important quadratic, and then I have the s squared plus omega squared.

OK. Well, you see it did get harder. We have s squared from a quadratic there. We have two quadratics. We have a fourth-degree polynomial down there. Partial fractions will work. Partial fractions can simplify this, for any polynomials, but the algebra gets quickly worse when you get up to degree four. But actually, this can be, it could be done. And I don't plan to do it. To me, this would eventually give the solution to this example. But we have other ways to get that solution. And I believe, for me at least, the other ways are simpler.

I know that the solution is a combination of cos omega t and sine omega t. And this is the particular solution I'm talking about. And I can figure out what those combinations are, because I know the right form. Here, I have to deal with partial fractions and degree four, down there. I'm going to chicken out on that one. I won't completely chicken out. I'll say what the pieces look like. But I won't figure out all the numbers. OK.

So all this thing, I see as some constant over-- well, this factors into s minus s1 s minus s2. Those are the two roots, as we saw above. So I have a linear, a linear, and a quadratic. And partial fraction says that I can separate out the first linear, the second linear, and the third quadratic, which I could factor too, but-- I could factor s squared plus omega squared into that times that, but it brings in imaginary numbers. So I'll put a cs and a d. OK. Four numbers to be determined, or rather not to be determined. Because I'm going to stop there. 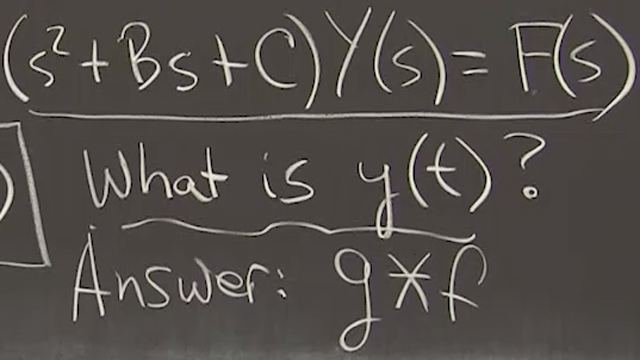