Use Model-Based Design with MATLAB and Simulink to model power electronics and control systems, run simulations, and generate embedded code for a TI microcontroller 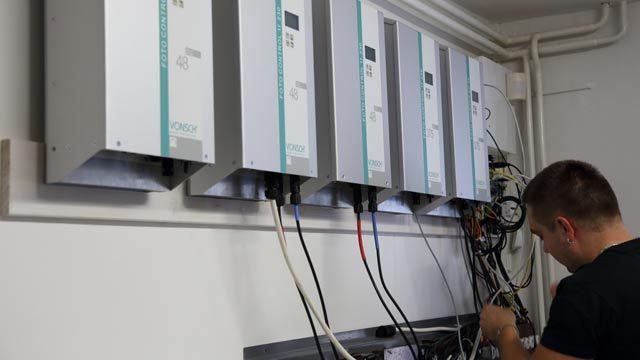 Government incentives for renewable energy and increased consumer awareness of the advantages of solar power are sparking demand for efficient solar battery chargers and solar inverters. VONSCH has developed two product lines to meet this demand: FOTO CHARGER DC 48 and FOTO CONTROL 1f. The FOTO CHARGER product uses direct current (DC) output of solar panels to charge batteries, and FOTO CONTROL 1f products convert the DC output of a solar panel or battery into alternating current (AC) that can be directed to the grid or used locally.

VONSCH used Model-Based Design to accelerate the development of control software for its solar inverter and battery charger products.

“Model-Based Design significantly shortened our development time, enabling us to meet the target launch date despite changing requirements caused by new legislation,” says Dr. Jakub Vonkomer, research and development software engineer at VONSCH. “We used our Simulink models for both simulation and code generation, which let us focus on our core design challenges, not C-language implementation specifics.”

In the past, VONSCH engineers wrote control software for three-phase inverters by hand in C, which meant they had to wait until hardware was available before software development could start. This approach was feasible when VONSCH had only a few product types sold in larger numbers. As VONSCH began specializing in custom power electronics solutions, the team needed a more efficient process to design a wider variety of products to be sold in smaller numbers.

To capitalize on planned government subsidies for solar power, VONSCH wanted to complete product development before the subsidies took effect. However, numerous legislative changes led to a rapidly shifting market, with solar panel providers flooding VONSCH with additional requirements based on the newest legislation.

To speed development while accommodating changing requirements and to manage the added complexity introduced by the single-phase inverters in their newer products, VONSCH needed a way to simulate their control algorithms early in the development process—before hardware was available—and to generate code once the hardware was ready.

Working in Simulink® and Simscape Electrical™, a team of three software engineers created models of electrical systems including transistors, diodes, and batteries. They simulated this model to identify switching transients, optimize values for passive elements, and validate filter behavior with various switching frequencies.

Before hardware was available, the team ran closed-loop simulations with the plant models to verify the initial controller designs.

Once the prototype hardware was ready, the team refined their plant models based on initial hardware tests and used Embedded Coder® to generate C code from their Simulink models for a Texas Instruments™ Piccolo™ microcontroller.

Following hardware tests in the lab, they used MATLAB® to plot data exported from the microcontroller and performed spectral analysis with Signal Processing Toolbox™.

Through several iterations, the team refined and optimized their controller designs in Simulink based on the test result analysis, regenerated code for the target microcontroller, and retested on prototype hardware.

Even with delays caused by requirements changes during development, the team met its planned timeline for development of the FOTO CHARGER product and simultaneous development of 375-volt and 48-volt versions of FOTO CONTROL, all of which are now in production.