⋮
By the way, NEVER do things like define pi as 3.14. pi already exists in MATLAB. All this does is introduce additional error into the problem.

⋮
Why did you edit away parts of your question? That is extremely rude.

⋮
I face with same problem while solving this equation as well. A0 and A can be multiplied with 10^3

⋮
at least if I find symbolic solution of this equation, it will be a good job 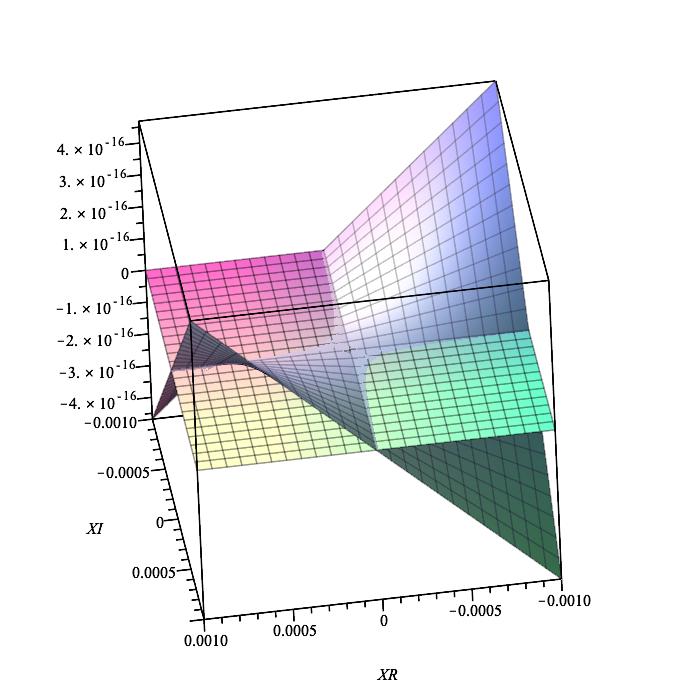 The flat plane is 0 . The line near XR = 0 suggested to me that I try for a purely imaginary solution, which gave the results I indicated above. The line near XI = 0 hints that by symmetry there just might be two roots with near-zero imaginary components.

You should agree I have done nothing that changes the fundamental nature of the problem. But what I did was make it easier to work with, and easier to understand the next steps because we can understand these simple numbers a little better.
We are looking for the root(s) of that thing. Again, recognize this is symmetric in x (as well as y now.) y == 0 is clearly a solution, but a spurious one created when we cleared the fraction. So ignore that solution.
Do any other roots exist? In fact, the first sinh term will dominate the result, because sinh grows in magnitude so rapidly. One trick is to consider the Taylor series of equ3, remembering this old rule as we go:
https://en.wikipedia.org/wiki/Descartes%27_rule_of_signs
vpa(taylor(equ3,'order',50),3)
ans =

The point is to carefully look at the coefficients of every term in that series. I generated a lot of terms here, just to convince you that none of the coefficients are negative, at least out that far. So if we have a root at zero, and all coefficients of the Taylor polynomial are positive, then we can assert that no other root exists. (A useful fact to remember - The Taylor series for sinh(u) is convergent for all u. Therefore, if we can prove no root can exist for the Taylor polynomial in this case, then no root can exist for the original function either.) And since the result is a symmetric function in the unknown (there may only be odd order terms in the Taylor polynomial, think about it - this is just the difference of a pair of sinh terms), then no negative root exists either.
So next, I suppose we could spend some time to compute the general coefficient in the Taylor expansion of this function, then to prove it must always be positive. I think I can do that, based on the Taylor series expansion for sinh.
https://en.wikipedia.org/wiki/Hyperbolic_functions
It is pretty simple really. The Taylor series of sinh(u) has only odd terms in it, and the nth term is just u^(2*n+1)/factorial(2*n+1). But since the sinh(4.1381*y) in our expansion will dominate the sinh(1.738*y) term, the difference of the two will always have a positive coefficient, for large n as well as small.
And again, as long as the resulting polynomial always has positive coefficients (with a zero constant term) then there are no positive roots, nor are there any negative roots due to symmetry.
One other comment: I see you think there was a root near -50? That was at best a spurious one, due to numerical problems since we have shown no roots can exist. When x is small in your original version equ1, you were dividing by a VERY small number when x is approximately -50. And that will cause numerical problems. That is not an issue in what I did. As long as EVERY coefficient in the Taylor series expansion of equ3 is uniformly positive (they are) then no root can exist other than zero.