An ordinary differential equation involving higher order derivatives is rewritten as a vector system involving only first order derivatives. The classic Van der Pol nonlinear oscillator is provided as an example. The VdP equation becomes stiff as the parameter is increased.

x double prime plus x equals 0. This involves a second order derivative. So to write it as a first order system, we introduced the vector y. This is a vector with two components, x, and the derivative of x.

The first component here is just a matter of notation. All the content is in the second component, which expresses the differential equation.

Or in vector terms, the initial vector is 0, 1. That implies they solution is sine t and cosine t. When we write the initial condition in the MATLAB, it's the column vector 0, 1.

We're going to integrate from 0 to 2pi, because they're trig functions. And I'm going to ask for output in steps of 2 pi over 36, which corresponds to every 10 degrees like the runways at an airport.

Now if I go back to the command window, and ask to capture the output in t and y, I then get vectors of output. 37 steps, vector t, and two components y, the two columns containing sine and cosine. Now I can plot them in the phase plane.

Plot ya against y2. If I regularize the axes, I get a nice plot of a circle with small circles every 10 degrees, as I said, like the runways at an airport.

The Van der Pol oscillator was introduced in 1927 by Dutch electrical engineer, to model oscillations in a circuit involving vacuum tubes. It has a nonlinear damping term. It's since been used to model phenomena in all kinds of fields, including geology and neurology.

It exhibits chaotic behavior. We're interested in it for numerical analysis because, as the parameter mu increases, the problem becomes increasingly stiff. To write it as a first order system for use with the MATLAB ODE solvers, we introduce the vector y, containing x and x prime.

Here's the nonlinear damping term minus y1. When mu is 0, this becomes the harmonic oscillator. And here it is as the anonymous function.

Let's run some experiments with the Van der Pol oscillator. First of all, I have to define the value of mu. And I'll pick a modest value of mu. Mu equals 100. And now with mu set, I can define the anonymous function.

It involves a value of mu. And here is the Van der Pol equation in the second component of f. I'm going to gather statistics about how hard the ODE solver works. And for that, I'm going to use ODE set, and tell it I want to turn on stats.

I need an initial condition. Now I'm going to run ODE45 on this problem. And I'm specifying just a starting value of t, and a final value of t. ODE45 is going to pick its own time steps. And I know with t final equals 460, it's going to integrate over it about two periods of the solution.

Now we can watch it go for a while. It's taking lots of steps. And it's beginning to slow down as it takes more and more steps. Now this begins to get painfully slow as it runs into stiffness.

I'll turn off the camera for a while here, so you don't have to watch all these steps. We're trying to get up here to 460. And I'll turn it back on as we get close to the end.

OK, well, the camera's been off about three minutes. And you can see how far we've gotten. We're nowhere near the end. So I'm going to press the stop button here. And we'll go back to the command window.

And oh, so we didn't get to the end here. Let me back off on the time interval and try this value here. See how that works. So this is going to still take lots of steps.

But we'll be able to-- This will go over about one period. We'll actually get to the end here.

I'll leave the camera on until we finish. OK so that took a little under a minute. And it took nearly 15,000 steps. So let's run it with a stiff solver.

There. So it took half a second, and only 500 steps. So there's a modest example of stiffness here. So let's examine the Van der Pol equation using the stiff solver. Let's capture the output and plot it.

Because that plot wasn't very interesting. I want to plot it a couple of different ways. And again, I want to go back up to the-- capture a couple periods.

Let's plot one of the current components as a function of time. And here it is. Here's the Van der Pol equation.

And you can see it has an initial transient, and then it settles into this periodic oscillation with these really steep spikes here. And even this stiff solver is working hard at these rapid changes. We've got a fair number of points in here, as it is it chooses the step size.

And now, let's go back to the command line and do a phase plane plot. So here's the phase plane plot of this oscillator with damping. And it's nowhere near a circle, which it would be if mu was 0.

And this is the characteristic behavior of the Van der Pol oscillator. 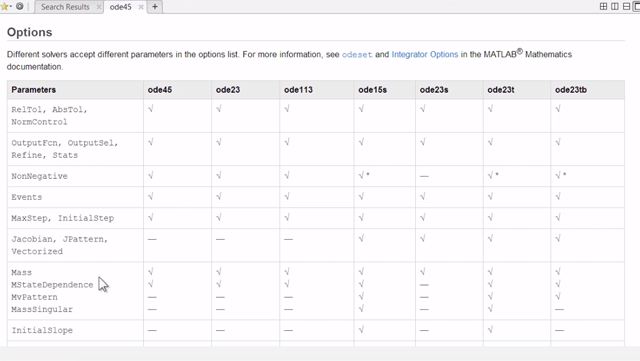