This video is about one of the key applications of ordinary differential equations to electrical flow, flow of currents in a network. And so I drew a network, a very simple network. It's just called an RLC loop. It's only got one loop, so it's a really simple network.

The R stands for resistance to the flow. The L stands for an inductance. And the C is the. Capacitance those are the three elements of a simple linear constant coefficient problem associated with one loop. And then there is a switch, which I'll close, and the flow will begin. And there is a voltage source, so like a battery, or maybe let's make this alternating current.

So the voltage source will be some voltage times an e to the i omega t. So we're going to have alternating current. And the question is, what is the current? We have to find the current, I. So the current is I of t going around the loop.

And we saw our differential equation will have that unknown I of t, rather than my usual y. I'm going to use I for current. Again, this is an RLC loop that everybody has to understand, as in electrical engineering.

So I'm going to have a second order differential equation. Well, you'll see what that equation is. So you'll remember Ohm's law. That the voltage is the current times the resistance. So this gives me a voltage across the resistor.

If the current is I and the resistance is R, then the voltage drop from here to here is I times R. So that's that term. But now I have also my current is changing with time. This is alternating current. It's going up and down.

So there, that's the physical equation that expresses this voltage law, which says that around a closed loop-- this is a closed, loops are closed-- add to 0. So I have four terms, and they combine to give us 0.

So there's an equation I'd like to solve. And how am I going to solve that equation? By the standard idea which applies when I have constant coefficients and I have a pure exponential forcing term. I look for a solution that is a multiple of that exponential, right?

Well, it's actually a differential integral equation. I can make it a more familiar looking differential equation by taking the derivative of every term. Suppose I do that.

The derivative of the integral would be just I itself. So I'd have 1 over C I. And I would have the derivative here, I omega V e to the I omega t.

So it's just a standard second order constant coefficient linear differential equation. And in fact, if you are a mechanical engineer, you would look at that and say, well, I don't know what L, R, and 1 over C stand for. But I know that I should see the mass, the damping, and the stiffness there.

So we have a complete parallel between two important fields of engineering, the electric engineering with L, R, and 1 over C, mechanical engineering with M, B for damping, and K for stiffness. And actually, that parallel allowed analog computers-- which came before digital computers and lost out in that competition.

So why don't I figure out what that W is. So what am I going to do? As always, I have this equation. I have a pure exponential. I look for a solution of that same form. I plug it in. And I get an equation for W.

That's exactly what I'll do on the next board. I'll put W e to the I omega t into this equation and find W. Let's do it. Maybe I'll bring that down just a hair and I'll do it here where you can watch me do it.

Now, what happens when I put I in for that second term, R. I just get an R. R times W times e to the I omega t. No problem.

And now finally, a 1 over C. The integral. The integral of the exponential brings down-- let me put it in the denominator neatly-- I divide by I omega when I integrate e to the I omega t. I have a division by I omega.

That's it. That's it. Those are the three terms that come-- times W, the unknown. This is to find. And of course, we find it right away.

Believe me, all these ideas are so important. There's a whole vocabulary here. But you see, we've done exactly the same thing for other constant coefficient equations. We just called the coefficient A, B, C. Or maybe M, B, K.

And now we have slightly different letters, but we don't have a new idea here. The idea is this 1 over, that 1 over the impedance, that will be the transfer function, which multiplies the source to give the complex number W. And W is a complex number.

I have to now think about that. And that impedance is always called Z. So we now have a new letter for the important quantity that shows up in the denominator there. And again, its real part is the resistance. Its imaginary part comes from L and C.

But the magnitude is easy. What's the magnitude of a complex number? It's the real part squared and the imaginary part squared. Oh, that should have been a plus there, I think. I don't know how it became a minus.

So all that squared. Are you OK with that? It's the real part squared, which is the resistance. And this combination gives the imaginary part. We square that. That's maybe called the reactants. And the sum of those squares is the impedance squared, the magnitude.

So we have essentially successfully solved a second order constant coefficient single equation for the current. What to do now. Just let me add a little bit more. Maybe just a comment.

So how do we proceed with a full scale circuit with many nodes, many resistors, many conductors, many edges? Well, we have a big decision to make. And that's the comment I want to make.

They have a choice. They can use Kirchoff's current law at the nodes and solve for the voltages at those nodes. Or they can do as we did for one loop, use Kirchoff's voltage law around that one loop which said that the currents in the loop gave a total voltage drop adding to 0.

Because it's not so easy to see which are the loops to consider and which loops are combinations of other loops. The linear algebra is the question. And the linear algebra, to get the loop picture independent and clear, is more difficult than the node picture.

The node picture with the unknown voltages, V at the nodes, is the good one. And the matrix that comes into that is the incidence matrix. It connects nodes and edges. It says how the network is put together.

And that matrix, I'll study with a little bit of linear algebra. So that comes in a later video. If you look for incidence matrices, you'll see probably two videos about those very, very important and beautiful matrices. Thank you. 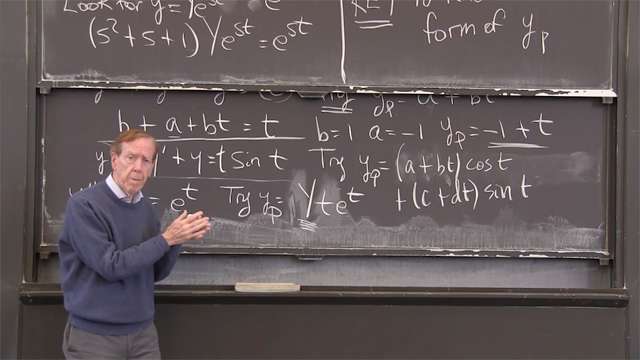