Imaginary exponents with pure oscillation provide a “center” in the phase plane. The point (y, dy/dt) travels forever around an ellipse.

OK. So this is the second lecture about these pictures, in the phase plane that's with axes y and y prime, for a second order constant coefficient linear, good problem. Good problem.

And you remember that we study that equation by looking for special solutions y equals e to the st. When we plug that into the equation, we get this simple quadratic equation. And everything depends on that. So today this video is about the case when the roots are complex. You remember, so the roots, complex roots, you have a real part, plus or minus an imaginary part. And this happens when b squared is smaller than 4ac.

Because you remember, there's a square root in the formula for the solution of a quadratic equation. There's a square root of b squared minus 4ac, the usual formula from school. And if b squared is smaller, we have a negative number under the square root. And we get complex roots. So last time the roots were real. The pictures in the phase plane set off to infinity, or came in to 0, more or less almost on straight lines.

Now we're going to have curves and spirals, because of the complex part. So here are the three possibilities now. We had three last time. Here are the other three with complex roots. So the complex, the real part, everything depends on this real part that the stability going in, going out, staying on a circle depends on that real part.

If the real part is positive, then we go out. We have an exponential e to the a plus i omega t. And if a is positive that e to the at would blow up, unstable. So that's unstable.

Here is a center. When a is zero, then we just have e to the i omega t. That's the nicest example. I do that one first. So in that case we're just going around in a circle or around in an ellipse. And finally, the physical problem where we have damping, but not too much damping. So the roots are still complex. But they're going in. Because if a is negative, e to the at is going to 0. So that's a stable case.

It's pure oscillation, a spring going up and down, an LC circuit going back and forth, pure oscillation. And we see the solutions. So I've written-- I've taken this particular equation. You notice no damping. There's no y prime term. OK. So here is the solution, famous, famous solution. And y prime it will be c1, I guess the derivative of the cosine is minus omega times sine omega t, plus c2. The derivative of that is omega cos omega t.

As time moves on that point moves. And it's the picture in the phase plane, the orbit sometimes you could say, it's kind of like a planet or a moon. So for that, what is the orbit for that one? Well it goes around in an ellipse. It would be a circle with-- let me draw it. This is the case omega equal 1. In that case, in that most famous case, we simply go around a circle.

There's y. There's y prime. We have cosine and sine and cos squared plus sine squared is 1 squared. And we're going around a circle of radius 1, or another circle depending on the initial condition.

Here there's a factor omega, giving an extra push to y prime. So if omega was 2, for example, then we'd have a 2 in y prime from the omega, which is not in the y. And that would make y prime a little larger. And it would be twice as-- it would go up to twice as-- that's meant to be, meant to be an ellipse with height 2 up there, or in general omega, and 1 there.

So in the y direction there is no factor omega. And we just have cosine and sine. And that would be a typical picture in the phase plane. But if we started with smaller initial conditions, we would travel on another ellipse. But the point is-- and these are called, this picture is called a center.

OK. So that's the center. And now I'll draw one with a source, or a sink. I just have to change the sign on damping to get source or sink. So let me do that. So now I'm going to do a spiral source or sink. This is the unstable one, going out to infinity. This is the stable one coming in to 0. And let me do y double prime, plus or maybe minus 4y prime, plus 4y equals 0. Suppose I take that equation.

Plus sign, and then the minus sign, with a minus 2. Then all the roots have a plus, plus or minus i. Everything is depending on these roots, these exponents, which are the solutions of the special characteristic equation, the simple quadratic equation. And you see that depending on positive damping or a negative damping, I get stability or instability. And let me draw a picture.

I don't if I can try two pictures in the same thing, probably not. That wouldn't be smart. So what's happening then? Let's take this one. So this solution y is e to the minus t. That's what's making it stable coming into 0, times-- and from here we have c1 cos t and c2 sine t. That's what we get from the usual, as in the case of a center that carries us around the circle.

So what's happening in this picture, in this phase plane? Here's a phase plane again, y and y prime. Without the minus 1, we have a center. We just go around in a circle. But now because of the minus 1, which is the factor e to the minus t in the solution, as we go around we come in. And the word for that curve is a spiral.

So this would be the center, going around in a circle. But now suppose we start here. Suppose we start at y equal 1, and y prime equal 0, start there at time 0. Let time go. Plot where we go. Where does this y and the y prime, where is the point, y, y prime? OK.

I'm starting it at-- so I'm probably taking c1 as 1, and c2 as 0. So I'm starting it right there. And then I'll travel along, depending on sines. I would go, I think, probably this way. So it will travel on a-- it comes in pretty fast, of course. Because that exponential is a powerful guy that e to the minus t. So this is the solution, damping out to 0.

That's with the plus sign, plus damping, which gives the minus sign in the s, in the exponent. And then so that is a spiral sink. Sink meaning just as water in a bathtub flows in, that's what happens.

Now what happens in a spiral source that's what we have with a minus sign. Now we have a 1. Now we have an e to the plus t. Everything is growing. So instead of decaying, we're going around but growing-- OK. I'm off the board, way off the board with that spiral. Which is going to keep going around, but explode out to infinity.

So those are the three possibilities for complex roots, centers, spiral source, and spiral sink. For real roots we had ordinary source, and ordinary sink, no spiral. And then the other possibility was a saddle point, where almost surely we go out. But there was one direction that came into the saddle point.

OK. Those six pictures are going to control the whole problem of stability, which is our next subject. Thank you. 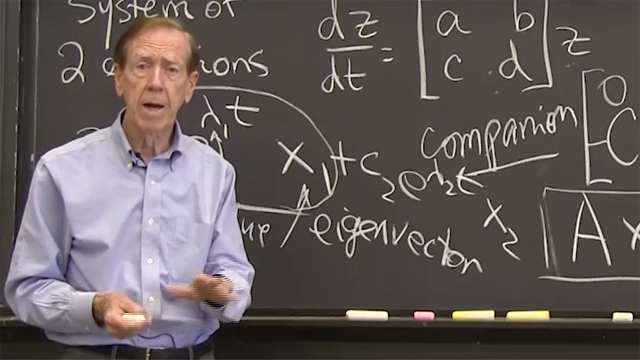