Use Simulink and Simscape Multibody to model the handling system, helicopter, and ship and to simulate the system under conditions that would be difficult or unsafe to test at sea

"MATLAB and Simulink helped us to quickly verify technical concepts, accurately estimate the performance of our design, minimize system qualification time, and deliver a system that answers program needs." 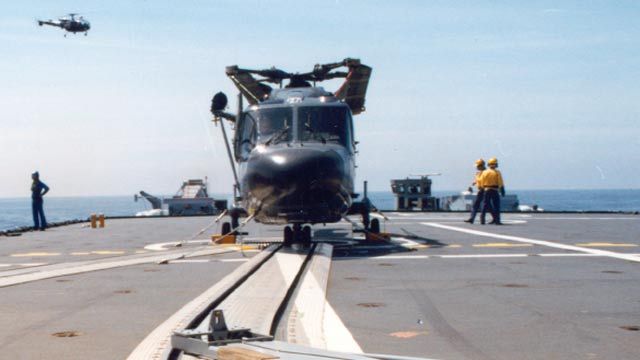 The SAMAHE® helicopter handling system can transfer a 10-ton helicopter between the hangar and flight deck of a navy ship in less than two minutes. Designed by DCNS, a French naval defense and energy company, the SAMAHE® system operates safely up to sea state 6 (waves up to 6 meters high) and can be configured for use on a variety of ships, from corvettes to frigates. Nine navies worldwide are using the SAMAHE® system.

DCNS used Simulink® and Simscape Multibody™ to develop SiMAéro (Simulation de Manutention d’Aéronef apponté), a simulator that performs computational analysis for naval aircraft handling systems. SiMAéro simulates how SAMAHE® will operate under a wide range of conditions, including many that would be impractical or unsafe to test on a real ship.

“By modeling the SAMAHE® system with Simulink and Simscape Multibody, we minimized its qualification time and reduced at-sea testing, which lowered costs and increased ship availability,” says Jérôme Vouillat, simulation engineer at DCNS. “We worked with MathWorks Consulting Services to run the simulations on our computer cluster with MATLAB Parallel Server, and accelerated hundreds of simulation runs.”

At-sea tests must be planned months in advance, and typically require a full month of preparation in addition to the week spent conducting tests onboard. Even with planning and preparation, there is no way to guarantee that the conditions needed for thorough testing—including heavy winds—will be present during the tests. In addition, testing extreme conditions and failure scenarios can be hazardous on a real ship. DCNS wanted a way to accurately simulate a wide range of conditions and scenarios to minimize at-sea testing and maximize crew safety.

In addition to modeling the mechanics of the SAMAHE® handling system, DCNS needed to model the landing gear and tires of numerous helicopters. The rolling and slipping characteristics of naval helicopter tires differ significantly from those of other aircraft, and must be accurately modeled for high-fidelity simulations.

The DCNS team had to simulate hundreds of test cases covering different types of ships and helicopters, a broad range of sea conditions, and several helicopter handling system configurations. One batch run required about 1200 different simulations to cover the helicopter configurations, wind conditions, and ship movements they had to analyze. They needed a way to shorten simulation times and reduce the manual effort required to conduct them.

DCNS used Simulink and Simscape Multibody to model and simulate the SAMAHE® system, and used Parallel Computing Toolbox™ and MATLAB Parallel Server™ to speed up the simulations.

Working in Simulink, the DCNS team with support of MathWorks Consulting Services created a top-level model comprising the helicopter, the ship, and the SAMAHE® handling system. The ship submodel incorporated environmental conditions, such as wind and sea state. The complete model contains about 4500 blocks and 190 configurable parameters.

The team used Simscape Multibody to model the landing gear of the helicopter and the mechanics of the SAMAHE® system. The helicopter tires were modeled using differential equations encapsulated in an S-Function block. The team created a library of ship and helicopter Simulink models, which they update regularly to simulate new configurations and systems.

To verify their physical models, the team performed functional validation and then compared the simulation results with measured results from at-sea testing with the real system.

Initially, one simulation run took about four hours to complete. Working with MathWorks Consulting, the team used Parallel Computing Toolbox to parallelize the application and MATLAB Parallel Server to scale up the simulation runs to a 20-core computer cluster.

DCNS engineers are currently updating their models to support planned enhancements to the system. This effort is part of DCNS’ continuous improvement of products and processes for research and development activities.